‘The Young and the Restless’ Spoilers: Victor Responsible for Fake Jack’s Trail of Carnage – Who is Marco’s Next Victim?

BY Janette E Smith on May 31, 2015 | Comments: 8 comments
Related : Soap Opera, Spoiler, Television, The Young and the Restless 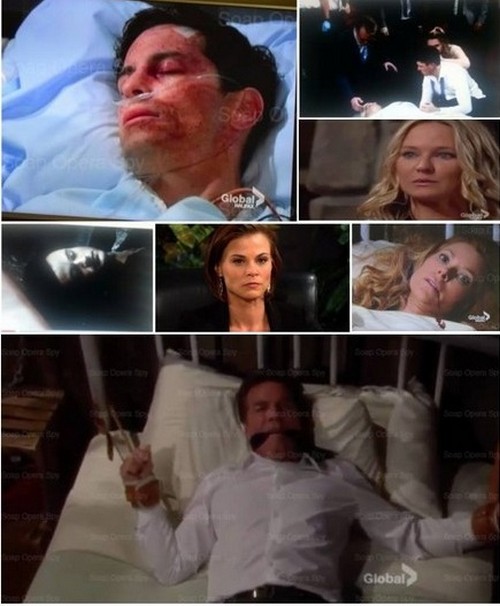 “The Young and the Restless” spoilers tease that the storyline involving Jack Abbott’s (Peter Bergman) doppelganger could get even more dangerous. We now know that the impostor is a menacing drug lord named Marco Anicelli. Y&R rumors say that Marco may be responsible for the cabin killings and more – even worse, rumors say that he could soon strike again. Who will be Marco’s next victim?

Everyone is aware of Victor Newman’s (Eric Braeden) pure hatred for Jack Abbott, but people were not aware of how far he’ll go to bring Jack down. Victor has stepped over the line by bringing innocent people into his web of deceit and lies. Victor’s tunnel vision has made him just as bad if not worse than the monster he brought in to take over Jack’s life. So many people have been affected by Victor’s actions and there will undoubtedly be severe consequences.

First, we have the most obvious victim of Victor’s crimes. Jack Abbott was kidnapped from his honeymoon, chained to a bed, starved and tortured by psychotic Kelly Andrews (Cady McClain). Jack is a recovering addict and has been forced to drink alcohol and drugged tea, which makes us wonder if Jack will have to deal with that monkey on his back again. The family could have another intervention on their hands if Jack gets hooked on drugs. Plus, Jack will likely suffer PTSD from his disturbing nightmare on that island.

Next up is Jack’s new bride, Phyllis Abbott (Gina Tognoni). Phyllis has been having passionate animal sex with this impostor, who happens to be on the FBI’s most-wanted list. If Phyllis finds out she’s pregnant with Marco’s baby, what would this do to her and her relationship with Jack? “The Young and the Restless” writers could be setting up some serious strife for Phyllis in the coming months.

Marco has also been bonding with Jack’s son, Kyle Abbott (Lachlan Buchanan), but that hasn’t necessarily been a bad thing. Kyle’s “dad” took him golfing, gave him advice and even let him go for a joyride in the new Ferrari. Of course, they were in a near-fatal accident, but they survived and the whole experience brought them closer together. There may not be a lot of damage here except for the fact that Kyle might prefer the impostor over his own father. The ironic part of this story is that Marco probably had Kyle deliver payoff money for Kelly’s murder, which will be pinned on Jack. Naturally, Kyle is clueless. We also have Sharon Newman (Sharon Case), who was framed for the cabin killings and nearly went crazy trying to prove her innocence. Luckily, Sharon was cleared before she really went off the rails again.

In addition, we have a string of Y&R corpses thanks to Victor’s master plan. There’s Summer’s (Hunter King) hubby, Austin (Matthew Atkinson), who’s dead because he knew too much. Noah’s (Robert Adamson) fiancé, Courtney (Kelli Goss), also bit the dust for knowing more than she should. Then, there’s Kelly Andrews, who likely died on Marco’s orders. The real Jack will be blamed for Kelly’s murder, which will only add to his misfortune. Tobias Grey (Jeffrey Christopher Todd), the nerdy mole who spied for both Victor and Marco, is yet another victim. Marco used Tobias to frame Sharon, but he set up an “accident” to get rid of him once he was no longer of use.

The “Scooby Doo” gang received the updates that Tobias was the killer, but Kevin (Greg Rikaart) isn’t buying that he’s really the murderer. Mariah (Camryn Grimes has indicated some suspicion as well. They’ll definitely need to watch their backs. As we’ve seen with Austin and Courtney, snooping is a quick way to get killed. Kevin just can’t seem to stop hacking into the GCPD computers for evidence, but every clue he finds just puts the cabin crew in more danger.

It’s been a long and winding road for this chaotic storyline, but it should be wrapping up in June. That’s good news for viewers who are ready to see Victor and Marco get what’s coming to them. As the smoke begins to clear, what will the future look like for the victims who are lucky enough to make it out alive? Stay tuned to “The Young and the Restless” to see the aftermath of Victor’s attempt to bring down Jack.

So Y&R fans, what do you think about the consequences of Victor’s actions? Was Victor so caught up in destroying Jack that he didn’t care who was destroyed along with him? Will the victims have long-lasting effects from Victor’s plot? Who could be next on the killer’s list? Let us know what you think in the comments below and don’t forget to check CDL tomorrow for the latest “Young and the Restless” spoilers, rumors, updates and news.