BY Heather Hughes on June 2, 2015 | Comments: 6 comments
Related : Spoiler, Television, The Young and the Restless 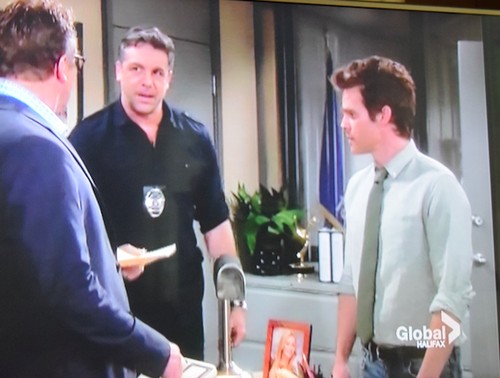 “The Young and the Restless” spoilers for Tuesday, June 2, tease that Mariah (Camryn Grimes) and Summer (Hunter King) will argue about whether Tobias (Jeffrey Christopher Todd) is really the cabin killer. Kyle (Lachlan Buchanan) will side with Summer and agree that Kevin (Greg Rikaart) should let this go. Meanwhile, Kevin will try to convince Paul (Doug Davidson) that there’s more to this case. Paul will indicate that Detective Harding (Chris McKenna) has looked into everything extensively. Harding will hand over DNA evidence that points to Tobias as the killer. Kevin will still be suspicious, but Paul acts like it’s silly for Kevin to think anyone besides Tobias is at fault here. After Kevin leaves, Harding will admit that Kevin might be right about the case being wrapped up too conveniently. Paul will give in and allow Harding to quietly keep digging.

At Crimson Lights, Victor (Eric Braeden) will rip into Nick (Joshua Morrow) for allowing Sharon (Sharon Case) to have more visitation rights with Faith (Aly Lind). Victor will believe that Nick is letting Sharon manipulate him. Talk will turn to Nikki’s (Melody Thomas Scott) drinking and Nick will hint that Victor should’ve paid more attention to what was going on. Victor will mention that he wants to see Nikki, but there are no visitors allowed at the rehab facility. When Nick replies that Neil (Kristoff St. John) went to see Nikki, Victor will be stunned.

Neil will question Nikki about how she’s doing, but she’ll be more interested in how he’s dealing with the situation with Devon (Bryton James) and Hilary (Mishael Morgan). Neil will be reluctant to say much, but he’ll admit that the idea of revenge is appealing. Nikki will ask if he’d ever act on his feelings, but Neil will say that just thinking about vengeance helps him cope. As Neil exits, he’ll urge Nikki to take things one day at a time. Nikki will have a conversation with her counselor, Angel (Frank Runyeon), but he’ll get a text that says Victor has arrived. As Nikki eavesdrops nearby, Angel will inform Victor that she doesn’t want to see him.

After Hilary signs her divorce papers, Lily (Christel Khalil) will start taking jabs about her being a gold-digger. When Neil shows up, Hilary will apologize to him for everything that’s happened. Neil will think about his revenge goals as he holds a pen up in a stabbing motion. Hilary will thank him for coming to sign and express hope that they can put the past behind them. Once Hilary is gone, Lily will give props to Neil for how he handled everything.

Other “Young and the Restless” spoilers reveal that Dylan (Steve Burton) will be concerned by how nervous Sharon is acting. Dylan will wonder if Sharon is taking her pills, but she’ll say that she’s just worried about making sure everything goes well during Faith’s visit. When Faith arrives, she’ll ask Sharon about the possibility of her having a baby with Dylan. Sharon will reply that they don’t have any plans for it. Faith will leave the room for a moment and Sharon will say she’s sorry about the baby question. Dylan will assure her it’s not a big deal and they’ll share a kiss.

At The Underground, Nick will have a nice dinner waiting for Sage (Kelly Sullivan). Sage will be grateful for the sweet gesture and they’ll sit down to eat. After Sage has painful cramps, Nick will take her to the hospital. The doctor will say that they’ll need to do an appendectomy. The surgery poses a risk to the child, but both Sage and the baby could be in danger if they don’t do the procedure right away.

Kevin will join the others at Crimson Lights and continue his efforts to convince them that they’re still in danger. Later, Kyle will see a news story that says the Genoa City Police Department isn’t convinced Tobias is the real killer. Mariah will say that Kevin always finds a way to make things interesting and that’s why she loves him. Summer and Kyle will tease Mariah about her choice of words and she’ll try to downplay it. Harding and Paul will confront Kevin about the story at the police station. Paul will be convinced that Kevin is the source that leaked the updates and he’ll say that Kevin is under arrest for obstruction of justice. Y&R rumors say that the next twist in the cabin killer mystery is coming up soon. Stick with the CBS soap to see if the killer will strike again.