BY Heather Hughes on May 1, 2015 | Comments: 6 comments
Related : Soap Opera, Spoiler, Television, The Young and the Restless 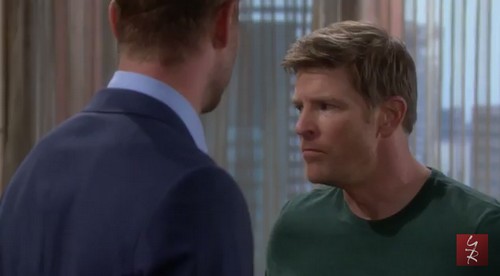 “The Young and the Restless” spoilers for Monday, May 4, tease that Victor (Eric Braeden) will question Nick (Joshua Morrow) about Gabriel (Justin Hartley). Gabe will hear them talking and ask why Victor feels intimidated by him. Victor will encourage Gabriel to keep his ego in check. Once Victor is gone, Nick will imply that Gabriel doesn’t know what he’s up against. Gabe will indicate that he knows all about what Victor is capable of. Gabriel and Nick will begin to argue about the recent issues with Sage (Kelly Sullivan) and Chelsea (Melissa Claire Egan). Gabriel certainly rubs Nick the wrong way and it’s only going to get worse once he finds out that Gabe is actually Adam.

Anita (Catherine Bach) will try to convince Chelsea that she has other choices besides Billy (Burgess Jenkins). Anita will urge Chelsea to go after Gabriel and his smokin’ bod. Chelsea will be adamant that what happened with Gabe was a huge mistake. Meanwhile, Victoria (Amelia Heinle) will talk to Billy about the wedding disaster. Billy will say that putting Chelsea through that wasn’t about revenge. It was about making Chelsea understand the pain she caused everyone. Victoria will tell Billy that he shouldn’t hang on to the bitterness. The rumors say Billy and Victoria will rekindle their romance soon. Stay tuned to Y&R to see if they’ll move forward with their relationship.

Abby (Melissa Ordway) and Stitch (Sean Carrigan) will discuss how the cabin killer could still be on the loose. Stitch will indicate that he’ll still be protecting Abby. Ashley (Eileen Davidson) will walk in and imply that Stitch should focus on work instead of cozying up to Abby. When Ashley refers to their fling, Abby will say that what they have is the real thing. After Ashley leaves, Abby will apologize for suggesting that things were serious too soon. Abby will get visibly upset when Stitch doesn’t say anything in response and she’ll go see Summer (Hunter King) and Kyle (Lachlan Buchanan). They’ll be having relationship woes of their own when Abby shows up crying. Later, Stitch will stop by and tell Abby that they have something good together.

Other “Young and the Restless” spoilers reveal that Chelsea will agree to come back to work, but she’ll demand to be in control creatively. When Victoria learns the news, she’ll insult Chelsea’s line and they’ll start fighting about Billy. Ashley will break it up and Chelsea will storm out. After she leaves, Ashley will praise Victoria for telling off Chelsea. Victoria will seem pleased by Ashley’s approval. Ashley will add that she always thought Victoria was a good match for Billy.

Dylan (Steve Burton) will talk to Paul (Doug Davidson) about the latex that was found on the tire iron. Paul will think that Dylan should let Michael (Christian LeBlanc) be the one to defend Sharon (Sharon Case). Dylan will protest that he’s just trying to help out a friend. Paul will say that Christine (Laralee Bell) believes she has enough evidence to send Sharon to prison for life. Dylan will get a call from Noah (Robert Adamson) and he’ll head over to his place. Kevin (Greg Rikaart) and Noah will say there’s an expert that can prove the still shot is fake. They’ll urge Dylan to help Paul see the light. Dylan will approach Paul about it, but there will be a snag in the investigation. Paul will say that Austin’s (Matthew Atkinson) computer has been stolen. Dylan will realize that the laptop could hold the key to the real killer. Is the Cabin Killer covering their tracks?

As Billy packs up his belongings, Anita will hint that Chelsea’s heart still belongs to Adam. As Billy says goodbye to Connor (Michael and Nolan Webb), Gabriel will show up and start talking about how Billy already had one foot out the door with Victoria. Gabe will add that Billy will be forgotten by Chelsea and Connor in no time at all. Billy will throw a punch and Chelsea will walk in. Billy will call Chelsea a piece of trash and say she was conning him. After Billy leaves, Gabriel will try to comfort Chelsea, but she’ll say that it was all true. It sounds like this is Adam’s big chance to swoop in and get the girl. Stick with the CBS soap to see if they’ll make some updates to their relationship.

Please Enjoy The Y&R video preview sneak peek for May 4, 2015 below.