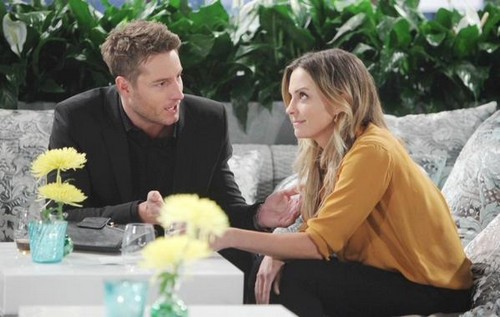 “The Young and the Restless” spoilers for Friday, May 1, tease that several Genoa City residents are in for quite a shock as are Y&R fans. Adam (Justin Hartley) and Sage (Kelly Sullivan) will take their make-out session to the next level. Afterwards, they’ll both admit that sleeping together was a bad idea. Billy (Burgess Jenkins) will call Sage and convince her to bring Gabriel (Justin Hartley) to the wedding. Fake Jack (Peter Bergman) will act as the best man and the ceremony will get underway. As Chelsea (Melissa Claire Egan) heads down the aisle, Gabriel will spot her from the staircase nearby. Chelsea will say her vows first and then it’ll be Billy’s turn to profess his love. Unfortunately, Chelsea is in for a rude awakening.

Billy will start off by saying they’ve made it through so much by being honest and understanding. Billy’s vows will take a nasty turn as he declares that he was wrong about Chelsea and she hasn’t changed at all. Everyone will be stunned as Billy announces there’s no way he’s marrying Chelsea and it’s because she had sex with Gabriel. Chelsea will protest that it was just one time and it was a big mistake. When Billy starts taking jabs at Chelsea’s relationship with Adam, Gabriel will come in to stop him. Gabe will indicate that Billy’s beef is with him and Billy will reply by insulting Chelsea. Gabriel will lunge forward at Billy, but fake Jack will break them up. Chelsea will plead with Billy to talk to her, but he won’t be interested in anything she has to say. Once everyone else is gone, Chelsea will tell Gabriel that it’s all his fault. Gabe will say he didn’t tell Billy they slept together, but Chelsea will insist that he should stay away from her. Later, Billy will tell Ashley (Eileen Davidson) that he’s glad he can move on.

Avery (Jessica Collins) will try to support Joe (Scott Elrod) as he does physical therapy. Joe will seem depressed, but Avery will indicate that she’s just glad he’s alive. Eventually, Joe will decide that being there with Avery means there’s something worth fighting for. Y&R rumors say that Joe and Avery will grow closer in the coming weeks. Stick with the CBS soap to see if they’ll rekindle their romance.

Other “Young and the Restless” spoilers reveal that Sharon (Sharon Case) will get some big news about her case. Michael (Christian LeBlanc) will say he received the lab results on the tire iron and it seems someone handled it with latex gloves. Dylan (Steve Burton) will continue trying to help in any way he can. When Dylan leaves the room, Sharon will answer his phone. Avery will be on the other end and she’ll be annoyed that Sharon took Dylan’s call. Dylan will return and try to talk to Avery, but she’ll hang up on him. Sharon will hint that maybe Dylan should be with Avery right now, but he’ll assure her that he’s where he needs to be.

Mariah (Camyrn Grimes) will give Kevin (Greg Rikaart) updates about the tests on the murder weapon and he’ll fill in Summer (Hunter King) and Noah (Robert Adamson). They’ll also send Kyle (Lachlan Buchanan) and Abby (Melissa Ordway) some texts to get everyone up to speed on the latest developments. Kevin will head to the station to see if he can find out what Courtney (Kelli Goss) saw on the footage before she was killed. Paul (Doug Davidson) will imply that he can save him the trouble. The video showed Sharon outside of Austin’s (Matthew Atkinson) apartment the night he was killed. Kevin will look at a still shot and believe something just isn’t right about it. Paul will be adamant that Sharon won’t get away with murder. Later, he’ll tell Michael that Sharon isn’t being honest with him. The conversation will turn to Michael’s separation and Paul will try to convince him that he needs Lauren (Tracey E. Bregman) in his life right now.

Kevin will continue mulling over the still shot and he’ll finally realize why it’s bugging him. Kevin will notice that the time stamp says 9 p.m., but the downstairs deli is still open in the picture. Since the deli closes at 6 p.m., it’s obviously fake. The cabin killer must have connections that are helping him or her set up Sharon. Stay tuned to Y&R to watch the mystery continue to unravel.