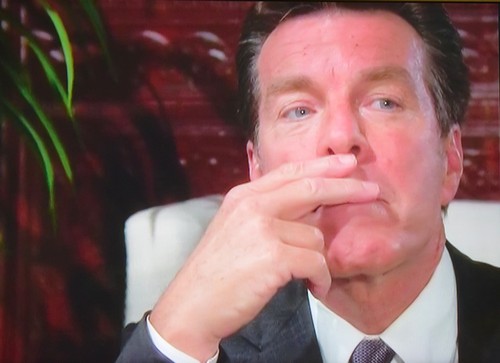 “The Young and the Restless” spoilers for Tuesday, June 9, tease that Jack’s (Peter Bergman) life will be in serious danger. Fake Jack aka Marco will be the highest bidder and he’ll get to decide whether Jack lives or dies. The captain will tell Jack and Marisa (Sofia Pernas) that he has a buyer and Jack will want to speak to him. When the captain says no, Marisa will suggest that “Marco” could call some of his men to help them. Jack will tell Marisa that he isn’t really Marco and indicate that he doesn’t have a plan. Marisa will insist that there has to be a way out of this.

Meanwhile, fake Jack will ask Kyle (Lachlan Buchanan) to wire a large amount of money from the Jabot account. Kyle will be suspicious, but he’ll want to help his father. When the deed is done, the captain will inform Jack and Marisa that the ransom has been paid. Marisa will try to charm the captain and they’ll share a kiss. It looks like Marisa is making one last effort to prevent their deadly fate.

Other “Young and the Restless” spoilers reveal that Abby (Melissa Ordway) will go to the hospital with Stitch (Sean Carrigan). They’ll be surprised to learn that Ashley (Eileen Davidson) checked herself out against the doctor’s orders. Stitch will refuse to leave until he finds out more about Ashley’s condition. Back at the lab, Stitch will confront Ashley about her health and insist that she could die if something isn’t done right away. It seems Ashley has a brain aneurysm and she needs surgery immediately. Ashley will be concerned about the risks, but Abby will say that she can’t lose her mom.

Joe (Scott Elrod) will try to tell Summer (Hunter King) that he was hoping to surprise Avery (Jessica Collins) with the news that he could walk. Joe will want Summer to help him clear up the misunderstanding. Dylan (Steve Burton) and Sharon (Sharon Case) will get clued in. They’ll discuss the fact that Joe isn’t paralyzed. Sharon will worry about their relationship, but Dylan will assure her that he’s committed to her.

Summer will show up at Avery’s place and Phyllis (Gina Tognoni) won’t be far behind. They’ll be stunned to find a broken vase and a pool of blood. Avery won’t be anywhere to be found. A phone with Dylan’s number dialed will be on the floor nearby. When Phyllis puts the call through, Sharon will answer and hand it to Dylan. Once he learns that Avery is missing, Dylan will head over and see that Avery’s car is gone, too. Paul (Doug Davidson) will arrive and get some updates on what they know so far. Phyllis will suspect that things could’ve gone horribly wrong when Avery rejected Joe.

Sharon will approach Joe and he’ll say that he’d never hurt Avery. Dylan will show up and demand to know what he did in retaliation when Avery turned him down. Joe will imply that maybe needy Avery ended up in Dylan’s bed again. Dylan will throw a punch in a fit of rage. A short time later, Paul will be informed that Avery’s vehicle has been found near the lake, but Avery is still missing. Y&R rumors hint that there will be a big twist to Avery’s storyline. Stick with the CBS soap to see what happened to Avery and how it will affect the rest of Genoa City’s residents.

So Y&R fans, what do you think about these “Young and the Restless” spoilers? Can Marisa help save Jack? Will Ashley get the lifesaving surgery she needs? Is Avery dead? If so, who killed her? Let us know what you think in the comments below and don’t forget to check CDL tomorrow for the latest “Young and the Restless” spoilers, rumors, updates and news.