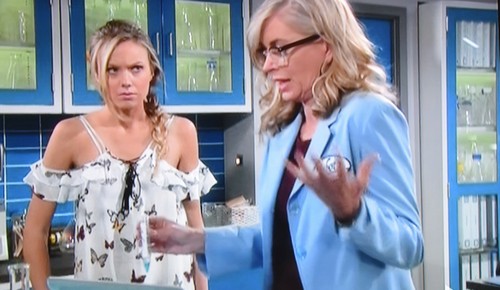 The Young and the Restless Spoilers are ready to start dishing on what’s going on with Ashley Abbott [Eileen Davidson] and her sudden health crisis. We have been watching Ashley struggling with a health issue that has caused her to begin taking some pretty heavy duty medication according to Dr. Ben ‘Stitch’ Russell [Sean Carrigan]. He saw her prescription pills fall out of her purse recently and she finally admitted it was for migraines she has been experiencing lately. We need to wonder, is someone, who wants Ashley out of the way, poisoning her and messing with her head while she works as a chemist revamping her precious Hex at the Jabot lab? With the many work related run in Ashley’s has been having lately during the merger of her families company into Newman Abbott, this list would be quite lengthy!

New Young and the Restless rumors are now reporting that the good doctor Ben becomes extremely concerned when Ashley starts to show more and more symptoms of something being seriously wrong with her. Ben and Abby [Melissa Ordway] rush Ashley to the hospital after she zones out and has a seizure-like attack right in front of them in the lab! According to still more YR rumors, these issues start to make Ashley lose her better judgment skills and she begins to act very reckless. Can this be the plan of the person who may be poisoning her? Hoping to demonstrate that Ashley is unstable and should not be making important decisions in her personal or professional life.

The person at the top of that list is Marco Anicelli – case in point a couple of weeks ago Marco made a comment to Victoria while discussing Chelsea’s lines that Ashley would be better off staying out of Chelsea’s line or she won’t be around anymore! Also, is all of a sudden making Ashley the executor of his will a ruse to make sure when Ashley goes down The Moustache does not point fingers at him? Marco has proven he wants anyone who stands as a threat to him to be gone.

Ashley has posed a threat since day 1. This “I love my sister” facade is just that, A FACADE! More exploding Young and the Restless teasers, have dear friend and ex husband Victor Newman [Eric Braeden] ready to rush to Ashley’s rescue as he fears Ashley is heading towards a nervous breakdown like she has had in past. Victor Newman apparently lends a hand to the damsel in distress now that his own wife Nikki [Melody Thomas-Scott] continues to recover in a rehab facility and has pushed Victor to the side.

With Victor acting as Ashley’s new best friend, will he actually add more stress to Ashley’s life or will Victor become her knight in shining amour and discover something criminal is going on at the Newman Abbott lab? CDL learned that Ashley has a brain aneurysm, and this will be revealed on the June 9 episode – is it a natural illness and just a coincidence that these manifest at this time? It has been many years since Ashley and Victor have been romantically linked, would you like to see them reunite as lovers? Now that Nikki has basically given Victor the green light to wander, it will be very interesting to see if he can connect to Ashley once more. Come back to CDL for all you The Young and the Restless spoilers, news and updates!