The Young and the Restless Spoilers: Marco Blows Up Jack Hostage Boat – Are Marissa and Real Jack Killed? 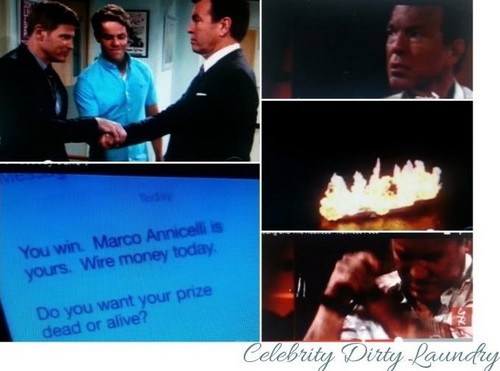 The Young and the Restless spoilers examine the week June 8 with regards to the deadly violence and action that viewers can expect. Do not miss this week’s CBS’s Y&R as there will be lots of action, mystery and shocking reveals. It will be literally an explosive week!

“It is time to take this company for ourselves” – the words of Jack Abbott [Peter Bergman], no wait, the words of the guy who thinks he is Jack Abbott – drug lord Marco Anicelli [ Peter Bergman] speaking to Kyle [Lachlan Buchanan] and Billy [ Burgess Jenkins] as they all make a pact to get Jabot back! Marco Anicelli AKA Fake Jack has really taken the role of Jack Abbott to heart, he truly seems to have real feelings for Jack’s son Kyle, his fake sister Ashley [Eileen Davidson] and of course he always had all kinds of feelings for his new fake wife Phyllis [ Gina Tognoni]!

Marco is loving his new life and will not give it up to anyone as a matter of fact he has been making plans to get rid of Victor Newman [ Eric Braeden] for quite awhile now and how bold is that? That shows you how serious Marco really is and how fearless he is as well! Marco has already set many plans in motion covering his tracks at every turn. Seriously this guy has more informants than Victor could ever dream of  so Victor better watch his back because D day is coming for The Moustache!

Marco knows Jack Abbott is up for sale to the highest bidder the next thing he needs to do is get a location and trajectory of the boat. Smugglers always vary routes to stay off the authorities’ radars. The real Jack is starting to wise up he is going along with the whole Marco Anicelli facade. It is sink or swim time for Jack and it looks like Jack is swimming! The drug smugglers tell Jack he is being sold to the highest bidder. Jack is frantic as he knows he HAS to get off that boat ASAP or he will be dead!! 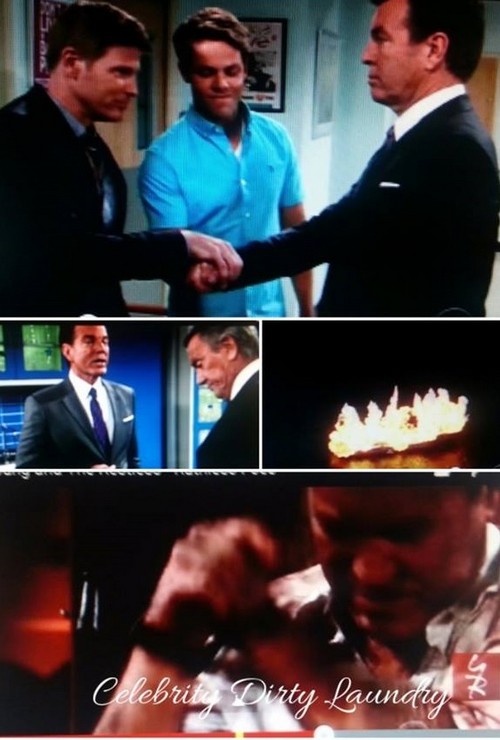 The Smugglers are in contact with a bidder and that bidder is none other than Marco Anicelli but of course they do not know it is Marco. Marco is determined to take care of Abbott himself considering Victor Eric Braeden failed at keeping him hostage and away from Genoa City. ANICELLI CAN NOT allow Jack Abbott to come back and take what he thinks is his life now! Marco tells the drug smugglers that he will wire them the money as they have no idea who they are dealing with. All the while all Marco needed was the location of the boat because he has other plans for ALL of them! Anicelli succeeds in getting the location and hires someone to plant a bomb on the boat.

This week we see the boat get blown to high heaven… and the question is, did Jack get off the boat in time. Of course, since white collar Jack is tougher and more resourceful than we all thought he escapes with the help of Marisa, Marco’s ex lover [ Sophia Pernas]. Jack promised Marisa that if she helped him he would take her to Genoa City and shower her with wealth but Marisa is only interested in having Marco back who she thinks is Jack Abbott. They have lots of history, history that makes cold blooded Marco Anicelli show some emotion when he thinks of her. Could Marisa prove to be Marco’s Achilles heel? Of course it’s possible since Y&R doesn’t write about men sleeping in the rain for women for no reason.

Marco is thrilled with the news that the boat exploded and is in flames – all on board lost! So naturally Marco assumes Jack Abbott is gone and feels relief – he can now take his defences down and deal with Victor Newman. But not alone, Marco will plan to take Victor down with his new bestie Adam Newman [ Justin Hartley].

There is that old saying “desperate people do desperate things” and in this case whom do you think that fits better, Jack or Marco Anicelli? Both will do very desperate things but who will win? Do not miss this EXPLOSIVE week of The Young and the Restless! CDL we assure you that the Y&R week of June 8 is a must see week for all fans of the CBS soap. Please leave your thoughts on this week’s upcoming events in the CDL comments below and come back for more The Young and the Restless spoilers, updates and news!