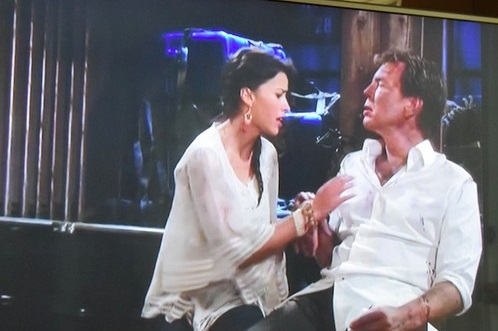 “The Young and the Restless” spoilers for Wednesday, June 3, reveal that Gabriel (Justin Hartley) will rip into Jack’s (Peter Bergman) doppelganger for exposing his true identity to Victor (Eric Braeden). Fake Jack will explain that he said Gabriel was Jack’s son to quiet Victor’s suspicions. Gabe won’t be happy about that idea either. Gabriel will insist that Victor will be gunning for him now that he thinks he’s an Abbott. Fake Jack will say Gabriel should just keep pretending, but Gabe will say that the charade is becoming more difficult. Once Gabriel leaves to work things out with Chelsea, fake Jack will look at the news story about the possibility that Tobias (Jeffrey Christopher Todd) isn’t the real killer.

At the police station, Kevin (Greg Rikaart) will argue with Detective Harding (Chris McKenna) and Paul (Doug Davidson) about putting him in handcuffs. Kevin will use his one phone call to summon Michael (Christian LeBlanc). When Michael shows up, Kevin will try to convince him that someone framed Tobias for the killings. Michael will urge Paul to look into the idea, but Paul will say that he already has Harding on it. Later, Paul will get an email confirming that Tobias wasn’t the murderer. The real cabin killer seems to be taunting the police by telling them to catch him or her if they can. It looks like we could see more murders if the cops don’t act fast.

Other “Young and the Restless” spoilers tease that the real Jack will try to convince Marisa (Sofia Pernas) to get the key and free him. Marisa will demand to know why “Marco” left and if he really loved her. The captain will arrive and order Marisa out of the room. He’ll ask for his money, but Jack will respond that he’s Jack Abbott. The captain will inform Jack that he intends on getting his money anyway. Jack is about to be ransomed to the highest bidder. Once a video camera starts rolling, Jack will state his name and say he’s being held hostage. The captain will whack Jack with his gun and Marisa will return a few minutes later. Marisa will believe Jack will die if he doesn’t hand over the money.

Meanwhile, Billy (Burgess Jenkins) will try to chat about work, but Victoria (Amelia Heinle) will be preoccupied by Nikki’s (Melody Thomas Scott) well-being. When Chelsea (Melissa Claire Egan) pops in, they’ll talk about some changes they want to make involving her line. Chelsea won’t be pleased. Victoria will head to the hospital to see Sage (Kelly Sullivan) and Nick (Joshua Morrow). Billy will stay behind and encourage Chelsea to come around on their ideas. Chelsea will just be ready to stop all the constant bickering. Gabriel will arrive and apologize to Chelsea for being too harsh. When Gabe learns that Sage is in the hospital, he’ll insist on rushing over right away.

At the hospital, Sage will be taken into surgery and Victoria will comfort Nick while he waits. A very hostile Gabriel will arrive and want to know what’s going on. Victoria will try to calm Gabe and Nick down. The doctor will come out to give them updates on Sage’s condition. After Gabe learns that Sage is OK, he’ll ask about the baby. The doctor will reply that the baby pulled through the surgery, but it’s too soon to say what will happen in the future. Nick will tell Sage what he’s learned and she’ll break down in tears. Nearby, Chelsea will confront Gabriel about his concern for Sage’s child. Y&R viewers know that there’s a good chance that this baby could be Gabe’s. There have been conflicting rumors on the recent “baby daddy” saga. We’ll have to see how this storyline progresses. Stick with the CBS soap to find out who the father is.