The Young and the Restless Spoilers: Chelsea Catches Billy Kissing Victoria, Makes Love to Gabriel – Michael and Sharon Move In 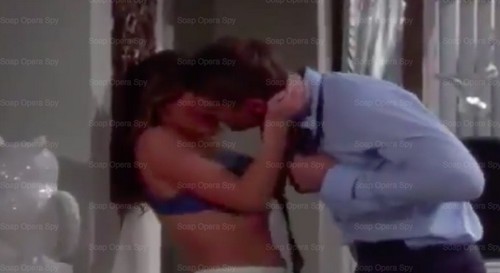 “The Young and the Restless” spoilers for Thursday, April 16, hint that several Genoa City residents will be drawn to former flames. Stitch (Sean Carrigan) will break up the brawl between Billy (Burgess Jenkins) and Gabriel/Adam (Justin Hartley). Billy will kick the urn that supposedly contains Kelly’s (Cady McClain) ashes. Stitch will be furious, but Victoria (Amelia Heinle) will defend Billy by saying he didn’t know. Billy will try to apologize, but Stitch won’t be interested in hearing it. Abby (Melissa Ordway) will wonder what they’re fighting about and Billy will indicate that he compared Gabriel to Adam. Gabe will imply that Billy’s spending a lot of time with Victoria and she doesn’t seem to mind. Abby will talk to Billy in private and say that Gabriel might be right about his feelings for Victoria. Abby will offer to help if Billy wants Victoria back. Billy will think Abby is bringing all this up because she wants Stitch, but Abby will claim they’re just friends.

At the penthouse, Gabriel will tell Chelsea (Melissa Claire Egan) about his fight with Billy. Gabe will say that Billy was defending the honor of his ex-wife. Chelsea will be annoyed that Gabriel is always trying to stir up trouble. Gabe will say he may be a jerk, but there’s nowhere he’d rather be than with Chelsea. Gabriel will confess that he threw the first punch, but Billy will be fine since Victoria is there to hold his hand. Chelsea will head to the athletic club and spot Billy kissing Victoria. She’ll leave without being seen. Billy will pull away from Victoria and say that it won’t happen again. It wouldn’t be fair to Chelsea.

Chelsea will return to Gabriel and tell him to kiss her. Gabe will be confused, but he’ll happily indulge. One thing will lead to another and the pair will passionately make love. It sounds like Adam is getting what he wants, but will it all fall apart when Chelsea gets updates on his scheme? The rumors say Gabriel’s real identity will be revealed thanks to Jack’s (Peter Bergman) doppelganger storyline. Stick with Y&R to see how the truth gets out.

Other “Young and the Restless” spoilers tease that Joe (Scott Elrod) will be upset about not being able to feel his legs. Dylan (Steve Burton) will show up at the hospital and ask Avery (Jessica Collins) to be Sharon’s (Sharon Case) attorney. Avery will say it’s not a good time and Dylan will think it’s because of Joe. Avery will hear the equipment beeping in Joe’s room and return to find him on the floor. The doctor will instruct Joe to stay in bed and Avery will agree that he needs to give his body time to heal. Later, Avery will try to distract Joe from his troubles with a game of hangman.

Lauren (Tracey E. Bergman) will suggest that Michael (Christian LeBlanc) should go on a trip with her. They need to get away for a while. Michael will shoot down the idea and Lauren will confide to Cane (Daniel Goddard) that Michael is pushing her away. Later, Sharon will be in need of a lawyer at her arraignment. Michael will show up to defend her. The prosecution will request that bail be denied, but Michael will convince the judge to give Sharon house arrest.

Michael will plan to move in as Sharon’s guardian. When Michael calls Lauren to give her the news, she’ll tell Cane that Michael found a way out of their vacation as well as their home. Abby will gripe about Sharon being free and Stitch will bring up that Dylan thinks Sharon is innocent. Since there could still be danger, Abby will say that it looks like they’re stuck with each other for a while. Word has it Stitch and Abby will end up in bed together soon so Y&R viewers will want to stay tuned.