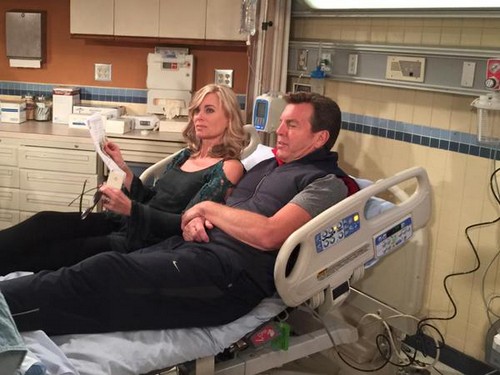 The Young and the Restless Spoilers are giving us some exclusive clues to the sibling battle about to begin that could mean life or death for one or both of them! Unconfirmed new Y&R rumors are starting to appear centered around a storyline consisting of brother and sister duo Ben ‘Stitch’ Russell [Sean Carrigan] and his very much alive and crazy sister Kelly Andrews [Cady McClain]. The real lunacy apparently begins while Stitch redoubles his protection efforts with the woman he is currently guarding, Abby Newman [Melissa Ordway], and examines his presumed dead sister’s ashes. On the Y&R episode for April 16 Billy accidentally kicks over the urn holding Kelly’s ashes (supposedly) while fighting with Gabriel. This will lead to unforeseen consequences…

Young and the Restless updates predict that when Stitch becomes more sidetracked with Abby than his mission, things really begin to take a unlikely turn. A grief stricken brother, Stitch, still blames himself for Kelly taking her own life. He feels like he had let Kelly down by not supporting her more emotionally when things started to unravel in Kelly’s life. Knowing she was ‘fragile’, Stitch tells Abby, he should have done a much better job to protect a delusional Kelly from herself. But Ben’s mood suddenly alters, when he learns that Kelly’s ashes are not real and sets out on a journey to find out what really happened to his little sister!

Additional Young and the Restless Spoilers are gathering new information on Ben and Kelly’s next shocking reunion! Apparently, Stitch figures out Kelly has been working in cahoots with Abby’s daddy Victor Newman [Eric Braeden] on a conspiracy plan to bring down Jack Abbott [Peter Bergman] and Jabot cosmetics. Ben learns quickly, Kelly’s prize for orchestrating and obeying the great and powerful Victor Newman, is the real Jack Abbott all to herself in what looks like Victor’s tack room where she can ‘make’ Jack fall in mad passionate love with her…and only her!

Will Ben be able to save the real Jack from his sister Kelly’s love slave twisted ways before it’s too late? Or will the Fake Jack aka ‘Yack’ be able to fool everyone including Billy [Burgess Jenkins] and Ashley [Eileen Davidson] and especially his new bride Phyllis [Gina Tognoni], into thinking that he is the real deal? Will Yack, a former prisoner just released from a Peruvian prison, let all the benefits of being an Abbott go to his head and screw up Victor‘s plan?

This storyline, even though not 100% original, let’s us see different avenues for our beloved veteran actors in a new setting. We are excited to see how this all plays out and hopefully making Stitch an all around hero when he solves the Fake Jack mystery and saves the real Jack! Come back to CDL often for more of The Young and the Restless spoilers, updates and news!