‘The Young and the Restless’ Spoilers: Kelly Dead or On The Run, Does Victor Know – Will Abby Sleep with Stitch? 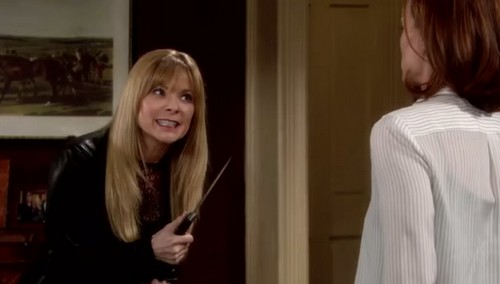 “The Young and the Restless” spoilers tease that Victor (Eric Braeden) will help Kelly (Cady McClain) out of the jam she’s gotten herself in. Y&R viewers know that Kelly nearly ruined everything when she knocked Phyllis (Gina Tognoni) unconscious with a champagne bottle. Fortunately, Victor agreed to help Kelly and he’s going to keep his end of the bargain—at least for now. It seems Kelly will go missing and she’ll be presumed dead. Jack (Peter Bergman) and Phyllis will be shocked to hear about Kelly’s death, but Stitch (Sean Carrigan) will take the news especially hard. Word has it that Stitch will lash out at Victoria (Amelia Heinle) for her refusal to mourn.

Over the last couple of weeks, Abby (Melissa Ordway) and Stitch have grown closer. Victoria watched as the pair hugged tearfully at the athletic club. All the signs seem to be pointing to Stitch and Abby becoming more than just friends. “The Young and the Restless” spoilers indicate Ashley (Eileen Davidson) will notice that Stitch has become very protective of Abby lately. Ashley will question Stitch about how cozy he’s getting with her daughter. It certainly looks like an affair is in the works. Sheesh. First, Abby jumped in bed with Austin (Matthew Atkinson) and now she has her sights set on Stitch. Abby’s becoming quite the little home-wrecker. Then again, perhaps Stitch will be a free man if his fight with Victoria turns into a full-fledged breakup. In that case, Abby could be the rebound girl.

As for Victoria, she’ll likely turn to Billy (Burgess Jenkins) for a bit of comfort in her time of need. Adam (Justin Hartley) would sure like to see Billy growing closer to anyone other than Chelsea (Melissa Claire Egan). The rumors say sparks will fly between Gabriel/Adam and Chelsea in the near future. Of course, once Chelsea discovers Gabriel’s true identity, she’ll have a lot to sort out. We’ll give you “Young and the Restless” updates as the big reveal gets closer.

So Y&R fans, what do you think about Kelly’s disappearance and presumed death? What is Victor’s plan and how will Kelly come back on the scene? What about Ashley’s questioning of Stitch? Do you think Stitch and Abby will spend some time between the sheets? Are you hopeful Adam will be reunited with Chelsea? Let us know what you think in the comments below and don’t forget to check CDL tomorrow for the latest “Young and the Restless” spoilers, rumors, updates and news.