The Young and the Restless Spoilers: Billy Discovers Gabriel Died A Year Ago After Adam Pushes Too Hard – Cover Blown? 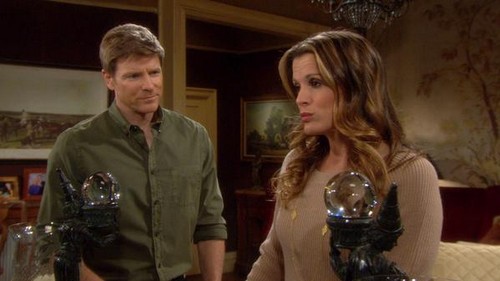 The Young and the Restless Spoilers are ready to release some exciting teasers on the next big storyline to shake up the residents of Genoa City. Now that Billy Abbot [Burgess Jenkins] has officially proposed to Chelsea Lawson Newman [Melissa Claire Egan], the couple is now on their way making preparations for their big lavish wedding day. Unfortunately, this is not good news for Adam Newman [Justin Hartley]. Adam and Chelsea are still technically married since he never really died like everyone thought he did when his car crashed and exploded in the ravine.

The newest Young and the Restless rumors are giving us a sneak peek into how Adam devises a new plan to ‘Get His Family Back’ before Chelsea and Billy can say ‘I do‘. Adam originally thought he could easily have Chelsea just fall in love with Gabriel Bingham. Than he would spring the fantastic news to her about his real identity: her long lost husband, father of her child and love of her life Adam Newman is still alive. But now with Chelsea’s up coming nuptials planned for only thirty days away, Adam will definitely need to up the ante.

We are hearing more Y&R rumors of Adam’s desperate actions that could possibly back fire on his future plans and destroy any type of a ‘Happy Ever After Ending’ he has always wanted with Chelsea and Connor. We are also hearing more Young and the Restless news and updates that Billy may figure out the whole ‘Gabriel-Adam’ story by putting pieces of Gabriel life together and finding out the real Gabriel Bingham was killed more than a year ago in a terrible accident.

What can this mean for Adam’s plan and his future with Chelsea? Billy isn’t about to let Adam off that easily, that’s for sure! We can tell this storyline is building up to make May Sweeps month just as nail biting as February sweeps month was. We now need to ask, when the whole truth finally is revealed, who do you think Chelsea will decide to plan her ‘Happy Ever After’ with, Billy or Adam? Let us know your thoughts in the comments below. Come back to CDL for more The Young and the Restless spoilers, news and updates.