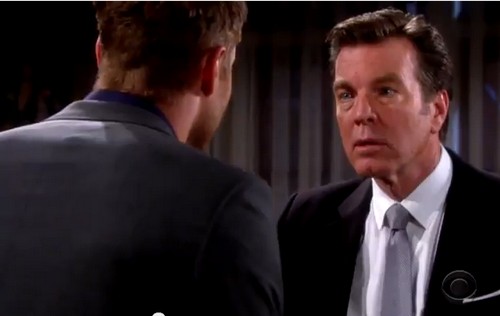 “The Young and the Restless” spoilers hint that several plans will be moving forward in Genoa City. It appears Victor (Eric Braeden) has all his pawns in place and he’s ready to take down Jack (Peter Berman). Victor will spend a bit more time in the confessional talking about what his endgame is and things certainly don’t look good for Jack. If Victor has his way, Jack will lose everything that matters to him, including Phyllis (Gina Tognoni).

With Kelly’s (Cady McClain) help, Victor hopes to get the ball rolling and destroy Jack’s life. Some spoilers have suggested that Victor may also be getting some help from Kyle (Lachlan Buchanan) who might actually be the person The Mustache sees in the confessional. However, Y&R viewers have to wonder if Victor is being honest with Kelly about the scheme. Kelly is willing to do her part as long as she gets Jack, but could Victor have something in mind for Kelly as well? Perhaps Victor has a grander scheme in play than anyone thought. Stay tuned to “The Young and the Restless” to see if Victor has a little something extra up his sleeve.

“The Young and the Restless” spoilers tease that Adam (Justin Hartley) will get his plan underway as well. Adam is about to make a move that could put him one step closer to rekindling his romance with Chelsea (Melissa Claire Egan) and winning back his family. Since Gabriel/Adam is set to be the best man at Billy’s (Burgess Jenkins) wedding, things are about to become beyond complicated.

Billy has made it known that he doesn’t trust Gabe, but he seems to have put aside his doubt for now. Still, Billy is probably keeping his eye on Gabriel. If Adam slips up, his whole plan could blow up in his face. Can Adam really pull everything off without a hitch? We’ll have to wait and see, but the rumors say Billy will learn Gabriel’s true identity in the near future. Once everything is out in the open, will Chelsea choose Billy or Adam? Stick with “The Young and the Restless” to see who her heart truly belongs to.

So Y&R fans, what do you think about the news that Victor’s plan is moving forward? Are you excited to see it all go down? Do you think Victor will succeed in destroying Jack? Does Victor have plans for Kelly as well or could she end up as a casualty of war? What about Adam’s big move? Is this the first step toward getting back together with Chelsea and recapturing the life he’s lost? Let us know what you think in the comments below and don’t forget to check CDL tomorrow for the latest “Young and the Restless” spoilers, rumors and news.