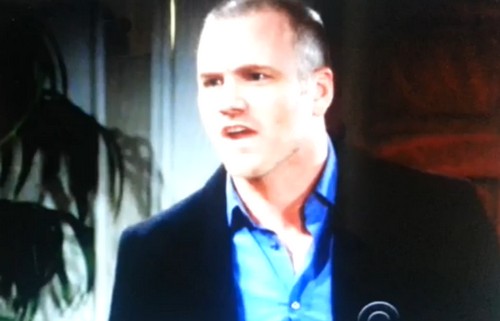 “The Young and the Restless” spoilers for Monday, March 16, hint that several Genoa City residents will stop at nothing to get what they want. Gabriel/Adam (Justin Hartley) will make a toast to his wife and say how she needs to know that he loves her. Adam will say she doesn’t even know who he is. Jack (Peter Bergman) will interrupt Adam and pull him aside. Jack will tell Adam that he should do the right thing and keep quiet. Revealing his identity like this is something Victor (Eric Braeden) would do. Adam will indicate that he won’t stand by and watch his wife walk down the aisle with another man. Adam will remain determined to get his family and his life back. Jack will think Adam should let Chelsea (Melissa Claire Egan) move on, but Adam will never give up on her.

Chelsea will be concerned that her happy engagement reminded Gabriel of his unhappy marriage to Sage (Kelly Sullivan). Billy (Burgess Jenkins) won’t have much sympathy. Since Jack and Phyllis (Gina Tognoni) are marrying in a month, it seems Billy will hop on the 30-day bandwagon. Billy will press Chelsea to marry then, but she’ll say that she wants a long engagement so she can plan everything – like how to avoid marrying Billy!

Other “Young and the Restless” spoilers for Monday, March 16, tease that Kyle (Lachlan Buchanan) will notice that Abby’s (Melissa Ordway) acting nervous and tell her to calm down. Kyle will warn her not to tell anyone what’s been going on. Summer (Hunter King) will accuse Mariah (Camryn Grimes) of being jealous of the relationship she had with Austin (Matthew Atkinson). Mariah will imply that Summer didn’t even know her husband.

Meanwhile, Stitch (Sean Carrigan) will discuss everything Abby told him about Austin’s death with Kevin (Greg Rikaart). Kevin will be curious why Stitch is pressuring Abby and he’ll say that Stitch knows more than he’s saying. Mariah and Summer will join the conversation and they’ll all speculate about Austin’s death. Summer will say Stitch had no reason to hurt Austin, but Kevin will think Stitch gave Austin some dirt on the Newman family. Stitch will deny participating in Austin’s documentary. When Stitch leaves, Kevin will wonder if maybe Stitch killed Austin to protect Victoria (Amelia Heinle).

Victor will pay Kelly (Cady McClain) a visit at the police station. Kelly will be annoyed that she had to spend the night in jail despite doing everything Victor asked. When Kelly asks if he’s double-crossing her, Victor will tell her she’ll be out soon and she should stop acting so cocky. Jack needs to think that Kelly’s just a fragile bird. Kelly won’t like that Phyllis is with Jack, but Victor will tell her to be patient. There’ll be good news in due time. Later, Kelly will make bail and get a room at the club. Kelly will order some champagne and look at an airline ticket on her tablet. Phyllis will stop by and demand to know why Kelly confessed. When Phyllis notices the travel itinerary, she’ll tell Kelly she’s going to report that she’s jumping bail. Kelly will grab the nearby champagne bottle and whack Phyllis in the head. Phyllis will be unconscious on the floor as Kelly looks on in horror. It seems the rumors that Kelly would regret getting involved in Victor’s scheme are turning out to be true.

Abby will hear a noise at Victoria’s house and the power will suddenly go out. Stitch will arrive and say he’s going to take a look at the circuit-breaker. Abby won’t want to be alone so she’ll go downstairs with Stitch. When they get back upstairs, a threatening message will be scrawled on the mirror. The words “I’m always watching” will be written in lipstick. Later, Kevin will find a video that shows Stitch really did participate in Austin’s documentary. The footage will show that Stitch asked Austin what he wanted to know, but Austin took his questioning too far and Stitch made him turn off the camera. This updates the cabin crew that Stitch was lying to them earlier.