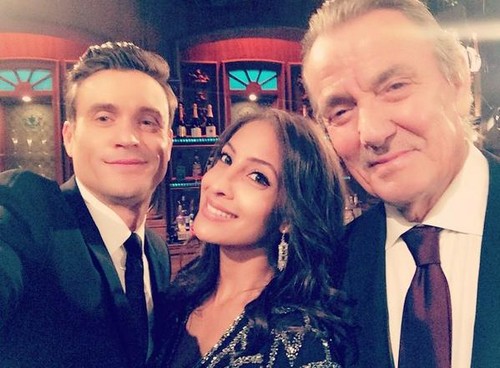 “The Young and the Restless” spoilers for Thursday, March 12, hint that fear will be on the minds of several Genoa City residents. Y&R updates say that Avery (Jessica Collins) will toss and turn as she has a terrible dream on the sofa. Suddenly, Avery will wake up shouting “I can’t do it!” Avery will tell Dylan (Steve Burton) that the dream involved feeling helpless about Phyllis (Gina Tognoni) and she’ll resolve to get rid of the wedding dress Joe (Scott Elrod) gave her.

Later, Avery will take the dress to Phyllis in hopes that she’ll take it off her hands. Phyllis will tell Avery that Kelly (Cady McClain) confessed and has been arrested. The nightmare is finally over for Phyllis. Avery will be excited to hear the good news. When Avery gives her the dress, Phyllis will wonder why Avery doesn’t plan on using it. However, Avery will say that she doesn’t want it because she wore it when she married Joe. Phyllis will say that it’s cursed and she’s not going to wear it either. Jack (Peter Bergman) has a lot to sort out before a wedding happens anyway. Phyllis will burn the dress and say “To the future.” The latest Y&R rumors say that Phyllis might want to dial down the optimism. Victor’s (Eric Braeden) plan is in full force and Phyllis could be devastated by Jack’s destruction.

At Crimson Lights, Sharon (Sharon Case) will have a chat with Nick (Joshua Morrow) and ask if he’s seeing anyone. The pair will discuss forgiveness and Nick will indicate that he hasn’t forgotten about what happened between them, but he has gained a new perspective. Nick will tell Sharon that she seems a lot better and Sharon will admit that she’s doing well. It appears Sharon is starting to forgive herself.

Dylan will join Nick and Sharon a short time later. Dylan will say he’s worried about Nikki’s (Melody Thomas Scott) drinking as well as the tension he feels with Avery. They’ll talk about Joe and Nick will say Dylan needs to modify his behavior. Nick will take a phone call and Dylan will talk to Sharon about how Avery might be afraid of him. Sharon will assure Dylan that if Avery is frightened, she’ll say so. Avery will show up and share what really happened in her awful dream. Dylan was about to go over a cliff and Avery couldn’t hang on. Avery will seek assurance that their relationship is on solid ground.

Other “Young and the Restless” spoilers for Thursday, March 12, reveal that Michael (Christian LeBlanc) and Lauren (Tracey E. Bregman) will discuss his cancer treatment. Lauren will think things are looking up for Michael, but he will remain pessimistic. Michael will wonder what Lauren would do if she outlived him. Lauren will reply that she could never find anyone else she loved as much as Michael. The pair will bicker some more and Lauren will believe that Michael’s attitude stems from being afraid.

At the park, Courtney (Kelli Goss) will call 911 as Noah (Robert Adamson) tries to comfort Abby (Melissa Ordway). Summer (Hunter King) will show them the screen of Abby’s phone, which has the message “Shut up or you’re next” written in lipstick. At the hospital, Courtney, Noah and Summer will speculate about who hit Abby. Kyle (Lachlan Buchanan) will show up and Noah will wonder where he was when Abby was struck. Kyle will say that he got into an argument with Abby and she left. When Ashley (Eileen Davidson) arrives, Abby will tell her mother that she was mugged. An officer will be there to take Abby’s statement and he’ll note that her purse wasn’t stolen. The officer will leave, but Abby will tell Ashley that she doesn’t want to talk about it.

In the waiting room, Ben (Sean Carrigan) will tell Victoria (Ameila Heinle) that maybe he shouldn’t have let Abby know about Austin’s (Matthew Atkinson) scheme. Ben will go into Abby’s room and scold her for walking through the park alone. Abby will tell Ben that she was coming back from the cabin where Austin was killed. Ben’s suspicions will be raised when he hears “killed” instead of “died,” but Abby will claim that she misspoke because she’s tired. Outside Abby’s room, Kyle will suggest that the person who killed Austin wanted to keep the contents of his documentary quiet. Noah will suggest that it may even be someone in one of their own families.