‘The Young and the Restless’ Spoilers: Neil Confesses To Devon – Avery Gets a Wedding Dress – Kelly Works Victor’s Plan

BY Heather Hughes on March 10, 2015 | Comments: 6 comments
Related : Soap Opera, Spoiler, The Young and the Restless 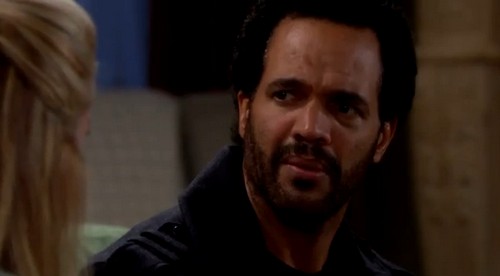 “The Young and the Restless” spoilers for Tuesday, March 10, tease that several Genoa City residents will try to move forward with their plans as others try to move on with their lives. Victor (Eric Braeden) will tell someone in the confessional that he’s been fighting his war with Jack (Peter Bergman) for decades. When it finally ends, Jack will lose everything. Victor will assure his apparent co-conspirator that it will all work out if he or she will be patient. Victor will stop at nothing to get what he wants and recent Y&R rumors say Kelly (Cady McClain) may regret keeping up her end of the bargain.

At Crimson Lights, Dylan (Steve Burton) and Avery (Jessica Collins) will discuss going bowling, but Avery will get a call that forces her to cancel. Joe (Scott Elrod) will show up and tell Dylan that he’s in town on business. When Dylan questions him about the box he’s holding, Joe will say it contains something for Avery and will let Dylan have a peek inside.

Meanwhile, Paul (Doug Davidson) will try to get Christine (Laralee Bell) to stop working so hard. Paul will think she needs to rest, but Christine will tell him that it doesn’t matter now. Christine will tell him that she moved up the court date for Phyllis (Gina Tognoni). She’ll want Phyllis to get what she’s got coming, especially since Christine can’t be certain that Nikki (Melody Thomas Scott) will face trial for her actions. Paul will tell Christine that he’ll fight for justice and will beg Christine to go home. However, Christine won’t be able to bear the idea of seeing everything they bought in preparation for the baby. Paul will agree that they should stay at the club until they’re able to handle the pain together.

Other “Young and the Restless” spoilers for Tuesday, March 10, indicate that Jack will have a talk with Phyllis about everything Summer (Hunter King) has been going through. Phyllis will note Victor’s sympathy for Summer’s situation, but Jack will think Victor shouldn’t be trusted. Avery will show up to tell Phyllis that her court date is tomorrow and she’ll learn that both Victor and Jack have agreed to help Phyllis. It’s not clear what the plan entails, but Victor claims to have an “ace-in-the-hole.” Later, Avery will worry about Phyllis at Crimson Lights, but Joe’s box will provide a little distraction. Avery will open it to find her wedding dress, which will bother Dylan. Avery will tell Dylan that the dress belonged to her grandmother and she intends on keeping it. After bringing up Sharon and making some snide comments, Avery will leave as Joe watches.

Nikki will have an intense discussion with Neil (Kristoff St. John) about the jam they’re in. Neil will feel guilty about killing Christine’s baby and insist that he has to come clean. However, Nikki will tell him to stick to the story or the police will find out that she lied. There’s no reason for them both to end up in jail. Victor will show up and wonder why Neil’s car isn’t parked outside. When Victor realizes that Neil took a cab, his suspicions will be raised.

After Neil leaves, Victor will ask Nikki if Neil was responsible for the accident in some way. Nikki will say that she was taking Neil to an AA meeting and Victor will question if an argument caused her to get distracted. The pair will bicker a bit more before Victor heads out to see Jack. After she’s alone, Nikki will call Neil and leave him a message in an effort to get him involved in AA. As for Victor, he’ll meet up with Jack to discuss Phyllis. Victor won’t tell Jack what he intends on doing, but he’ll assure Jack that his plan will work.

At the club, Lily (Christel Khalil) will give Devon (Bryton James) the news about the accident Neil was involved in. Talk will turn to Devon’s affair and Lily will say that Hilary is more at fault. Devon will still feel guilty and he’ll want to help Neil with his drinking problem. Lily will also have a chat with Kelly about Phyllis going to court, but Kelly won’t be worried. Over at the bar, Neil will be drinking again when Victor pops in. Victor will let Neil know that he won’t allow Nikki to be prosecuted when the accident wasn’t her fault. Devon will offer to drive Neil home so he doesn’t get in another accident and Neil will blurt out that he grabbed the steering wheel from Nikki. Neil will admit to Devon that he’s the one who killed Christine’s baby.

Phyllis will also have a confrontation with Christine and Paul. Christine will tell Phyllis that she has a key witness. Suddenly, Kelly will arrive and let them all know that there won’t be a trial once she tells them what she has to say. Victor will watch from the sidelines as Kelly puts his plan into action.