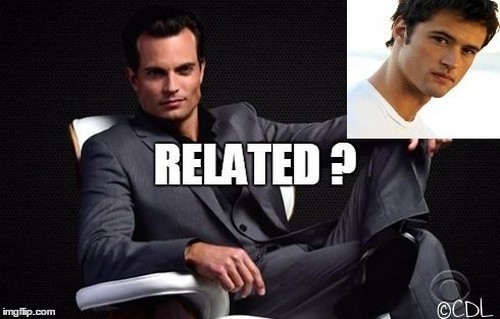 The “Young and the Restless” spoilers and coming and going news introduced Matthew Atkinson as Genoa City newbie Austin Travers months ago on the CBS soap. As soon as Austin arrived, Y&R fans knew he was hiding some major secrets about his past – and it turned out that they were related to his mother’s murder. But, the identity of his father was never really addressed. As soon as Scott Elrod arrived on the CBS soap as Avery’s ex Joe Clark, rumors began flying that he was related to Austin – and possibly even his father or uncle.

According to “The Young and the Restless” rumors and theories blowing up social media and message boards right now – Y&R fans are convinced that Joe Clark is the brother of 1990’s character Matt Clark, and he has returned to Genoa City to avenge his brother and the horrible way that the Newman Family treated him. Apparently, Joe doesn’t know the entire story and that his brother was actually a serial rapist, or perhaps he is just as twisted as Matt Clark (Eddie Cibrian) was and sees his brother as an innocent victim. Regardless, if Joe Clark is Matt Clark’s brother, then it stands to reason that Austin is Matt Clark’s son – and Joe’s nephew.

Recently on “The Young and the Restless,” Joe Clark and Austin Travers had a run-in with each other. Who knew that they even knew each other, let alone that Austin was doing a documentary project for him? Austin told Joe that the project was done and he wanted his money. Joe told him he was not needed any more and Austin said he still wanted to be paid for his work, so Joe tossed cash on the ground and walked away. Austin did not seem intimidated by Joe one bit or even fazed by his behavior, maybe because they are related?

“The Young and the Restless” spoilers teased for weeks that Joe Clark was headed to Genoa City to try and win back his ex Avery. But, could Joe have had more than one motive? Perhaps he was killing two birds with one stone – winning back Avery, and getting revenge on Nick Newman and his family for the way they treated his brother Matt many years ago. Last month on the CBS soap Austin had a blow up with Nick Newman (Josh Morrow) when Nick found out that Austin had kept valuable information from him about his bar, The Underground. The building inspector came by leaving messages with Austin that the Bar would be closed down if Nick didn’t fix the unstable structure.

Nick was livid with Austin and Austin quit! Nick had no choice but to hire a last minute contractor to do the work quickly. A few Days later Nick had his big Valentine’s Day party which ended in horrible tragedy with the roof caving in and causing a death. Nick Newman is now facing multiple lawsuits for this V-day disaster. If Austin and/or Joe were planning on taking down Nick Newman – then they are off to a great start.

As of Valentine’s Day, Austin is presumed dead, supposedly knocked on the head and killed (jury is still out on that). During this time we have learned that Austin and Abby Newman (Melissa Ordway) were having an affair. Austin infiltrated himself into both Summer and Abby Newman’s lives. When Summer viewed him at the morgue there was blood all over his face, and she turned away saying “thats him!” She did not really get a clear shot of Austin’s face and seeing as how she identified his body – the police have no reason to run any DNA tests and verify that it is indeed her “dead” husband.

Was Austin in the middle of a Newman / Abbott expose’ to expose the Newman’s and the Abbotts for the hypocrites that they are? Did he fake his death to frame the crime on Summer or Abby? It’s undeniable that Austin resembles both Joe Clark and Matt Clark, do you think he could be the son of one of Matt’s rape victims? Are Joe and Austin working together? Let us know what you think in the comments below and don’t forget to check CDL tomorrow for more “The Young and the Restless” spoilers and news.