‘The Young and the Restless’ Spoilers: Kelly Arrested After Odd Confession, Abby Found Bleeding and Unconscious After Attack 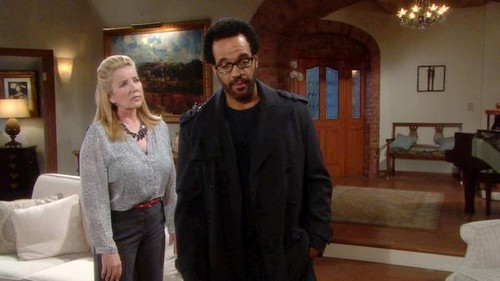 “The Young and the Restless” spoilers for Wednesday, March 11, tease that there will be plenty of conflict in Genoa City. Devon (Bryton James) will lead an intoxicated Neil (Kristoff St. John) into his apartment. Neil will say he wants to confess, but Devon will think he needs to get sober before he does anything. Hilary (Mishael Morgan) will show up and wonder what’s going on. Devon will hand Hilary some money for “services rendered” and ask her to leave. Neil will yell that he killed a baby and Devon will explain what happened. Hilary will tell Devon that she’s sorry and touch his chest tenderly. Devon will tell Hilary that Neil will be taken care of by his family, which doesn’t include her.

Other “Young and the Restless” spoilers for Wednesday, March 11, indicate that Kelly (Cady McClain) will make a shocking confession. Kelly will admit that she made up everything in an effort to win Jack (Peter Bergman) back. Naturally, Phyllis (Gina Tognoni) will be fuming. She’ll yell that Kelly made it look like Phyllis tried to kill her and ask if Kelly wants to make that a reality. Christine (Laralee Bell) won’t be happy about the news either. Paul (Doug Davidson) will wonder if Kelly’s coming forward now because she’s being threatened, but Kelly will insist that she just wants to do the right thing. Jack will tell Phyllis to calm down, but Phyllis will want Kelly to pay. Kelly will pass out and Victor (Eric Braeden) will bicker with Christine.

When Kelly wakes up, Paul will arrest her and Jack will be curious how Victor got Kelly to confess. After all, what’s in it for her? Victor will tell Jack to focus on the fact that Phyllis has been exonerated. Phyllis will be irritated that Jack isn’t acting like he’s happy for her. Jack will respond with his concerns about Victor and Kelly, but Phyllis will tell him that she just wants to move on with her life. At the police station, Kelly will spill the whole story to Paul and let him know that she poisoned her own tea. When Paul tells Christine that the charges against Phyllis will have to be dropped, Christine will leave in a rage. Victor will speak with Kelly and let her know that she’ll get what she wants. Since the latest Y&R rumors say taking down Kelly may be a part of the plan, there’s a good chance Victor won’t be true to his word.

At the cabin, Abby (Melissa Ordway) will recall her discussion with Mariah (Camryn Grimes) about the affair. Abby will also remember Summer’s (Hunter King) harsh words. Mariah will show up and say that Abby has returned to the scene of the crime. Summer will arrive with the rest of the gang and show Abby a compact with a threatening message on the mirror. The words “I saw what you did” will be written in lipstick.

Summer will accuse Abby of writing the message and Kyle (Lachlan Buchanan) will tell Summer about the previous one on the armoire mirror. Abby will say that maybe she doesn’t deserve real love and rush out. Kevin (Greg Rikaart) will wonder if they’re being watched and Kyle will go after Abby. Noah (Robert Adamson) will chase down Kyle and their suspicions will turn to Fen (Max Ehrich). Summer and Mariah will get into a physical fight and Kevin will break it up. Kevin will say that they all need to stick together. After they hear a noise outside, Noah will say that someone’s there and everyone will argue about going to the cops.

Kyle will find Abby at Crimson Lights and tell her that he thinks she’s behind the messages. Abby will imply that it wasn’t her shade of lipstick and will say that she’s just being accused because she’s the mistress. Later, Courtney (Kelli Goss), Noah and Summer will want to the talk the police, but they’ll stop to get their story straight and find Abby unconscious in the park. Just like Austin (Matthew Atkinson), Abby will be bleeding from a blow to the head.