‘The Young and the Restless’ Spoilers: Kelly Stabs Phyllis in Knife Attack – A Dream or Part of Victor’s Plan? 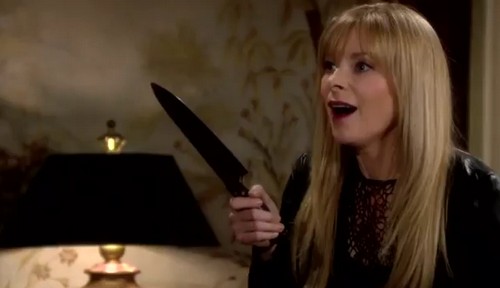 “The Young and the Restless” spoilers hint that Kelly’s (Cady McClain) fight with Phyllis (Gina Tognoni) is about to take another violent turn. Y&R viewers know that Kelly has teamed up with Victor (Eric Braeden) in his grand scheme. Kelly agreed to help Victor out on one condition: she gets Jack (Peter Bergman). However, Phyllis screwed everything up when she saw Kelly’s travel itinerary and threatened to report her for jumping bail. Kelly couldn’t have that so she whacked Phyllis over the head with a champagne bottle to keep her quiet. It seems in Kelly’s world, that’s a perfectly logical move. Besides, Kelly will stop at nothing to win back the man she loves.

The latest “Young and the Restless” promo video shows Kelly telling Phyllis that she deserves to die before stabbing a knife into her stomach. Does this mean the feud has finally come to a deadly end? Fortunately (or unfortunately depending on whose side you’re on), it seems everyone will remain alive and intact. Another “Young and the Restless” video shows a continuation of the scene and it appears that the brutal stabbing will just be terrible nightmare.

In the footage, Phyllis wakes up and grabs the fireplace poker to protect herself in case her dreadful dream comes true. Who could blame Phyllis for thinking that Kelly would want to take her out? In fact, Kelly’s probably contemplated it many times. In the dream, Phyllis will say that if Kelly kills her, she’ll just end up sitting in a prison cell. Kelly will respond that it would be worth it since she’d have the satisfaction of watching her lying on the ground bleeding to death. With realistic details like that, it’s no wonder Kelly will get spooked.

The stabbing may be a fake-out, but no one would be surprised if Kelly actually did the deed at some point. When it comes down to it, Kelly is 50 shades of crazy. Still, the rumors say Kelly could be the one who’s in for some trouble. Kelly’s partnership with Victor is bound to end badly. After all, if you play with fire, you’re going to get burned. We’ll give you updates as we learn more about how Victor’s plan will move forward.

So Y&R fans, what do you think about the news that Kelly will stab Phyllis? Are you bummed that it’ll only be a dream? Whose side are you on? Do you think Kelly’s involvement with Victor can only lead to trouble? Let us know what you think in the comments below and don’t forget to check CDL tomorrow for the latest “Young and the Restless” spoilers, rumors, updates and news.