The Young and the Restless Spoilers: Marco Returns From The Dead – Chelsea Gets the Truth From Adam, Covers Up and Deceives GC 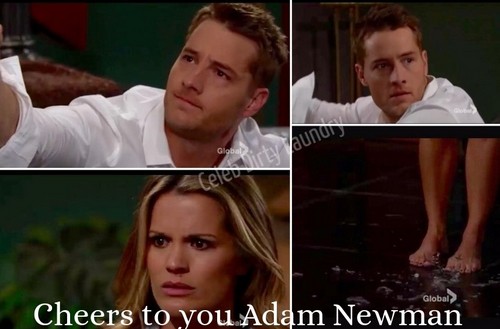 The Young and the Restless spoilers promise an explosive episode on Monday July 13 that none of the keen Y&R fans will want to miss! On Y&R July 13 the BIG reveal happens: Gabe [Justin Hartley] & Chelsea [Melissa Claire Egan] just finish making love in Daddy Dearest’s [Eric Braeden]  office. Chelsea leaves the room to do something and while she is gone Gabe is gloating in front of The Great Victor Newman’s portrait. Gabe has a drink in hand and says ,”How does it feel Victor having the son you despise beat you and take over your company. This is from Adam Newman” and raises his glass – next you hear glass breaking on the floor – it’s Chelsea’s dropped glass smashing! She heard it all she is shocked – as Adam turns around stunned. The acting in that 30 seconds was exceptional as they both conveyed everything with their eyes and we felt it!

Adam finally tells her who he is and chooses NOT to lie this time, because we all know Adam could have lied his way out of his little soliloquy if he really wanted to. Chelsea is still in shock and does not want to believe he is really Adam but deep down has always held on to the belief of Adam being alive when everyone else gave up. As previously reported Chelsea will also get angry about all of the lies she has put up with but is torn because she has such a deep love for Adam – a love so deep that nobody will ever understand.

What is in store for Adam and Chelsea? Chelsea knows if she reveals his true identity Connor will lose his father again as Billy [Burgess Jenkins] will come for vengeance. BUT Billy Boy is himself walking a fine line because he did shoot Adam and leave him for dead in the burning car, a rather serious crime! So any revenge Billy might exact on Adam is in this case truly a double-edged sword.

Chelsea and Adam decide to keep Gabe’s true identity to themselves because Chelsea knows the consequences of a reveal at this time would be calamitous and would include the loss of Newman Abbott. Chelsea agrees to go along with the secrecy plan reluctantly because she knows it is what is best for her family for now.

Chelsea will go through mixed emotions with this revelation and will freak out on Adam, getting very angry and why not? How much fun would that be if Chelsea just ran into Adam’s arms and forgave him, living happily ever after? Not Exactly soap opera optimization, right? If others in GC find out who Gabriel really is Sage’s [Kelly Sullivan] life is over, especially her relationship with self righteous Nicholas [Joshua Morrow], so for once Adam has the upper hand on that scheming piece of work Sage. Chelsea and Adam both know he is the town pariah and there will be no one happy to see him… except of course Chelsea’s mom Anita [Catherine Bach] – Adam could do no wrong in her eyes – oh yes, and Sharon Newman [Sharon Case]… CDL will explore this issue later on.

Sources say the next “must watch” show-stopper episode will be when Adam tells Chelsea what Billy Boy [Burgess Jenkins] did to him on that fateful day, kidnapping him at gunpoint and eventually shooting him – Chelsea will be LIVID!! Chelsea will be burning to confront self-righteous CRIMINAL Billy but she has to stay silent for now to protect her beloved Adam – the next few months should be interesting.

Adam’s plan with Newman Jabot is to give his old pal Jack [Peter Bergman] back his company and keep Newman Enterprises for himself but this will be wrought with difficulty while Jack thinks Adam was part of the treacherous plan to cover for Victor shooting him and take over Jabot.

Adam’s biggest worry right now, besides losing Chelsea, is Jack Abbott [Peter Bergman] waking up from his coma without being by his side to explain what he knows about the Marco situation. Jack is under the impression Adam was part of this wicked Marco plan that Victor was behind. The fact is when Adam finally figured out Jack was not Marco he wanted no part of the plot. Tragically for Adam, by that time Marco had the goods on Gabriel’s real identity. The problem was that while Adam knew Marco was not Jack, Marco also knew Gabe was really Adam Newman used that against him, blackmailing Adam into helping with his own diabolical plan.

Adam was also under the impression his long-time friend Jack Abbott was dead – so on the night of the Chancellor Park incident when Victor allegedly shot the real Jack, Adam was as shocked Jack was alive as Jack was being shot! Adam still has no idea Victor is behind the Marco impersonation and all of the horrible torture Jack has endured these past few months. The reality is the only person who can prove what Victor has done is Marco. Marco is believed to be dead but sources close to Y&R tell CDL that he is not and will be part of Victor’s Judgement day!

Without Marco there will be no truth because The Moustache will lie until the cows come home. Marco will eventually be in touch with Adam Newman and he will tell Adam what Victor has done so that Adam eventually goes to Jack with that information. Will Marco help Jack Abbott ? Of course he will for a price – the problem is you can never trust a con… and hasn’t Victor learned that the hard way?!

Stay tuned to CBS’s Y&R as the Adam Newman saga continues to unfold. What do you think CDL’ers, will Adam and Chelsea stay together now that she knows the truth? Will Adam be the hero and get Jabot back for Jack? Please share your thoughts and comments in the CDL comments below.