The Young and the Restless Spoilers: Avery’s Rapist Caught – Dylan Saves Joe From Being Shot 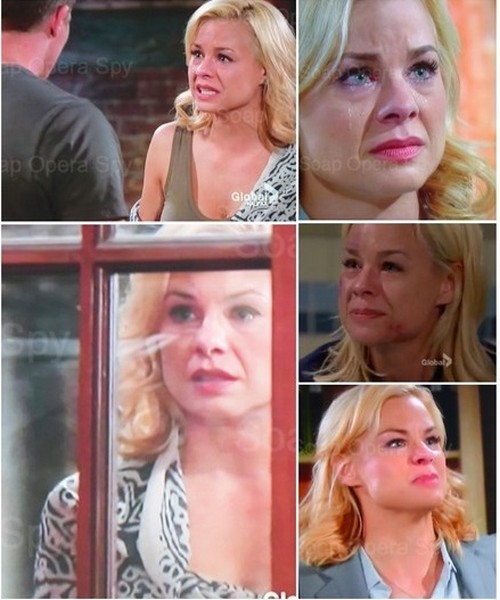 The Young and the Restless spoilers reveals that Avery’s rapist has been caught and he’s not Joe Clark! What is really going on with Avery Bailey Clark [Jessica Collins]? Avery Clark has been a pretty stand up gal since she hit town. Avery was also the same gal in her boring relationship with Dylan McAvoy [Steve Burton] – Avery always did the right thing no scandal, no cheating on Dylan though she did cheat on ex husband Joe Clark [Scott Elrod] during their marriage. Note: it is not her fault the writers did not give her character much of an exciting life.

Avery is the dutiful sister to Phyllis Abbott [Gina Tognoni]. Avery sacrificed and represented her niece Summer’s [Hunter King] now presumed dead criminal husband Austin Travers [Matthew Atkinson] even after he stalked, kidnapped and held a gun to her.

The sad thing about this character is the only excitement she has had in 2 years is her home cooking show [Yawn] last year & being beaten up and sexually assaulted – that is pretty pathetic.

What is really going on with Avery? Avery lost the love of her life Dylan while she was being Joe Clark’s nursemaid because she felt guilty for causing his paralysis injuries. What is so strange about the Dylan-Avery break up was that these two were unshakable no matter what happened, they always seemed to talk it through. Avery and Dylan seemed to give up on their relationship in a hot second which seemed very out of character for both of them, and what was even more out of character was Dylan jumping right into the sack with Sharon Newman [Sharon Case] almost as fast as Stitch [Sean Carrigan] did with Abby [Melissa Ordway]. Stitch still holds that record.

Avery has transformed from a strong confident Attorney to a meek & scared of her own shadow little mouse who needs a protector. This change has taken place in a matter of a month. Very hard to swallow – it just seems once again like TPTB Chuck Pratt Jr. and Jill Farren Phelps did not know what to do with a strong confident independent woman so they made her look crazy and irrational.

Now on the Monday, July 13 episode they have Avery showing up at Joe’s place threatening to shoot him, and of course we have the Knight in Shining Armor Dylan McAvoy talking her down and saving Joe. Chief Williams [Doug Davidson] then tells Avery they captured the rapist and that the rapist had her cell phone and purse in his car. According to top cop Paul, Avery’s rapist was caught attempting another rape and wearing the same ski mask as the one he wore during Avery’s assault – then they found Avery’s property in the culprit’s car. Look’s like what CDL predicted since the beginning is correct – Joe is innocent.

My question is does Paul catching the rapist change the way Avery has been acting like an off-balance crazy person out for revenge on an innocent man rather than the upstanding strong Defense Attorney she once was 2 months ago? What was all of that crazy behavior about? She has hated Joe Clark with every ounce of her being but all of a sudden not really?

On the Monday, July 13 episode Avery feels horrible about accusing Joe and wants to reconcile!! YES, I said it, she wants to reconcile! From being ready to blast his brains out raping her and for his horrible abuse and ruining her life to reconciliation in a moment – seriously??? So all of the scenes where she accused him of being an abuser and a sick freak are all null and void because he didn’t turn out to be the rapist? Avery flipped like a light switch the minute she saw that he could walk and had been faking it to keep her close. But all is okay now in Avery’s world?

Before Avery was raped she was already showing signs of mental instability causing Dylan to raise an eyebrow and wonder if she was trying to set Joe up. Avery had left her apartment in a mess with blood on the floor making everyone worry and believe Joe had done something awful to her.

Okay, I may be in the minority BUT hasn’t Joe put up with enough? Seriously – Avery cheated on him because why, he was a workaholic? Joe comes to town seeking revenge on her lover Dylan – is that so out of the ordinary for the scorned spouse to want revenge or at least dislike the person who his spouse cheated with? Seriously what were these writers thinking? I feel like the last 6 months of the Avery/Joe/Dylan show was a complete wash! One thing is for sure Jessica Collin’s last airdate is July 21 and you won’t want to miss it!

Cheers to you Jessica Collins for doing some of your best work in the last 2 months on The Young and The Restless. CDL’ers what do you think about Avery wanting to reconcile with Joe? Please leave your thoughts and comments in the CDL comments section below/