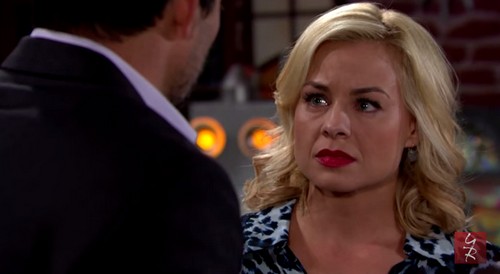 “The Young and the Restless” spoilers for Tuesday, June 16, tease that Lily (Christel Khalil) will lash out at Lauren (Tracey E. Bregman) over her cheating. Devon (Bryton James) will try to stop them from causing a scene, but Lily won’t back down. Cane (Daniel Goddard) will say that this is Michael’s (Christian LeBlanc) fault for setting everything up. Lily will imply that it just means Michael’s a guilty party as well. When Devon suggests that Lily and Cane can get through this, Lily will bring up Devon’s affair with Hilary (Mishael Morgan).

Once everything dies down, Devon and Hilary will chat about their upcoming wedding. Hilary will think they should keep things on the smaller side, but Devon will insist that he isn’t ashamed of their relationship. Hilary will hint that she doesn’t want to make this any harder on Neil (Kristoff St. John), but Devon will indicate that they need to show everyone how much they care about each other.

Meanwhile, Summer (Hunter King) will pay Victor (Eric Braeden) a visit. Victoria (Amelia Heinle) will ask if Kyle (Lachlan Buchanan) has given her news on anything, but Summer will leave without spilling any details. It seems Summer doesn’t want to get Kyle caught up in the feud between the Abbotts and the Newmans. Victor and Victoria will agree that the Abbotts are up to something. They’ll decide they have to get the upper hand on Jack (Peter Bergman).

Other “Young and the Restless” spoilers reveal that Jack’s doppelganger will try to act like the text message sent to his phone was meant for someone else. Once Kyle arrives, Phyllis (Gina Tognoni) will excuse herself. Kyle will hint that Summer knows something is up and fake Jack will be furious that he blew the plan over a girl. Fake Jack will continue to berate him, but Kyle will be apologetic. Eventually, fake Jack will say that he understands how girls can get inside your head. When Kyle mentions Phyllis’ coma, fake Jack will be thrown for a moment, but he’ll find a way to cover his blunder.

At the park, Summer will give Phyllis updates on Kyle’s recent actions. They’ll wonder what the Abbotts might have in store. Phyllis will understand why Summer felt she had to go to Victor and she’ll offer her support. Later, Summer and Kyle will patch things up. Kyle will say that fake Jack has really snapped this time. It sounds like things could get ugly.

Lauren and Cane will discuss how Michael keeps trying to push them closer. Cane will bring up the fact that Michael didn’t really sleep with the hooker he hired. Lauren will say that Michael will use her kiss with Cane to tear them apart just like he did with the prostitute. At Crimson Lights, Avery (Jessica Collins) will open up to Michael about what happened with Joe (Scott Elrod). Joe will pop in and start taking some verbal jabs at Avery. Michael will object, but Joe will suggest that Dylan (Steve Burton) probably figured Avery would cheat on him as well. Michael will imply that being abused as a child doesn’t give Joe a right to abuse women now.

Lily will show up and give Michael a good slap. Avery will leave them alone and Lily will chastise Michael for pushing Lauren toward Cane. Michael will contend that he didn’t force them to kiss and Lily will slap him again. A short time later, Lauren will have a conversation with Michael about this whole ordeal with Cane. Michael will say that he could tell Lauren was lusting after Cane and he can’t be convinced otherwise. Lauren will come close to signing the divorce papers, but she won’t be able to bring herself to do it.

At the athletic club, Joe will hint that despite what Cane might say, it certainly looks like he has feelings for Lauren. After Cane leaves, Lily will arrive and Joe will say that her husband did a very stupid thing. At home, Avery will have a flashback of Joe’s malicious behavior earlier. When Avery hears a noise nearby, she’ll dial Dylan’s number.

Fake Jack will do an Internet search on Marisa’s (Sofia Pernas) death, but he’ll be interrupted by Phyllis. It seems Phyllis has had about enough of fake Jack’s antics. When Phyliis demands to know the whole story, fake Jack will admit that the mysterious “M” from the text was woman he used to love. The walls are closing in on Jack’s doppelganger, but he’s not going to give up his cushy lifestyle without a fight. The rumors say a showdown is brewing that Y&R fans won’t want to miss. Stick with the CBS soap to see if fake Jack will regret playing a dangerous game with Victor.

See The Young and the Restless video preview promo for June 16, 2015 below