The Young and the Restless Spoilers: Fake Jack Is a Serial Killer – Victor Newman The Next Murder Victim?

BY Janette E Smith on May 24, 2015 | Comments: 2 comments
Related : Soap Opera, Spoiler, Television, The Young and the Restless 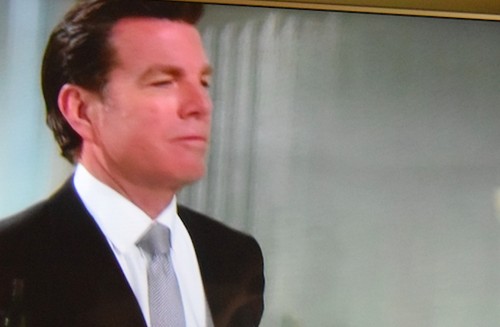 The Young and the Restless spoilers reveal that Genoa City has a serial killer on its hands and Victor Newman brought him there. A Y&R plot recap indicates that it is Victor who should be held ultimately responsible for Austin, Courtney, Kelly and Tobias’ deaths because from the looks of things Marco Anicelli has his hands in all of them. The killing spree started on Valentine’s Day with Austin we can speculate that Flack murdered the trouble maker because he found out too much while doing the Newman/Abbott expose. Poor Austin had live footage of something that would expose Victor’s diabolical plan and ruin the good life for Marco Anicelli, our most convincing Fake Jake.

Young and the Restless tells fans that Courtney also saw something that cost the young thing her precious life on surveillance video at the cop shop that pointed the finger at Flack and Victor’s dirty dealings. Marco was not playing Jack Abbott yet so he had lots of time to creep around and watch the Scooby gang. During this time he also had time to have Tobias (Victor’s former mole) set Sharon up for Austin’s and Courtney’s murders. Victor is unaware of what Fake Jack has done and is doing. While Victor is certainly a cold-hearted scoundrel he can’t truly fathom the pyscho depths of Marco’s evil and potential for violence.

Victor constantly reminds Flack to tow the line and follow his lead. But Newman rules is a huge problem as Marco trusts no one and he will let nothing stand in his way of the good life NOTHING and NO ONE! Fake Jack gave Kyle an envelope to send out ASAP and word in soap land is that it was money to pay “someone ” off to murder Kelly… Marco is setting Real Jack up for murder. This guy is always a few steps ahead of the invincible Victor. It seems Victor has no idea what kind of Frankenstein he has created but he will once the final nail is hammered in the coffin…. Coincidentally Dr. Frankenstein, the man who created Mary Shelly’s monster also had the first name Victor! Fake Jack will plot the demise of Victor. Marco feels he really is Jack Abbott and will not have anyone holding him down or holding prison over his head anymore.

Now to the latest Y&R death, that of his hired mole Tobias, the loose canon who caused a scene at the Newman/Abbott merger party. It seems that Tobias knew more than what he spouted off at the party, even though he was drunk when he left the party my gut tells me Marco Anicelli tampered with Tobia’s brakes causing the fatal accident. Fake Jack is standing outside of his hospital door peeping in, looking worried that all of his dirty secrets will be told when BAM flatline and Tobias Grey is dead. Was Tobias Anicelli’s 4th victim?

Marco is setting Victor up as he goes on his murderous way, everyone will think it was Victor who tried setting Sharon up because of the obvious disgust he has for her. Given that Victor tried gas lighting Sharon months back by bringing in a Cassie look alike, Mariah. Then Victor made Mariah a “Cassie ghost” to push Sharon off the deep end and get the secret out of her that she was hiding. Tobias’ room is full of 3 D fingerprint machines and other incriminating evidence connected to the Cabin killer mystery. Since Tobias was so vocal at the party and said he and Victor were associates everyone will naturally think Victor was behind all of it. Victor’s house of cards will start to crumble very soon… and to add to his pleasure don’t forget that Young and the Restless spoilers tell us that the real Jake returns to Genoa City this week. If Victor Newman is capable of a nervous breakdown it might very well be right around the corner.

Who is responsible for unleashing this monster Marco Anicelli on Genoa City? VICTOR NEWMAN of course… how will his family, friends and enemies react to what he has done to all of their lives? He brought the man in who murdered his granddaughter Summer’s husband, his Grandson Noah’s fiancee, Stitch’s sister and now Tobias, a kid who worked for the highest bidder. Who is next on Marco’s hit list? CDL is thinking that Victor Newman has moved to the top of that grim list. Stay tuned to CBS’s Young and the Restless for the answer to the question WHEN WILL VICTOR PAY? Come back to CDL for more The Young and the Restless spoilers, speculations, and updates as we learn what Marco has in store for Victor Newman!