BY Heather Hughes on May 25, 2015 | Comments: 5 comments
Related : Soap Opera, Spoiler, Television, The Young and the Restless 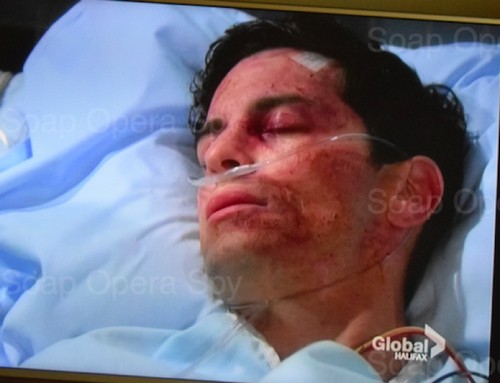 “The Young and the Restless” spoilers for Monday, May 25, tease that Tobias (Jeffrey Christopher Todd) will be revealed as the surprise party guest and he’ll stir up big trouble before he dies. Victor (Eric Braeden) and Ashley (Eileen Davidson) will demand that Tobias leave immediately. Fake Jack (Peter Bergman) will say they don’t need spies now that the companies have merged. Tobias will have a drink and start rambling about Victor’s dirty secrets. A drunk Tobias will jump on the bar and declare that they’re all “rich, entitled monsters.” Neil (Kristoff St. John) will pull Tobias down and Billy (Burgess Jenkins) will throw him out. Summer (Hunter King) and Kyle (Lachlan Buchanan) will tell Phyllis (Gina Tognoni) and fake Jack about seeing Tobias spying on them at Crimson Lights. A little later, Kyle and Summer will talk to Abby (Melissa Ordway) about the possibility that Tobias could be involved in the cabin killings.

Meanwhile, Noah (Robert Adamson) will visit Cassie’s grave and give a heartfelt speech about how he didn’t get a chance to say goodbye to Courtney (Kelli Goss). Mariah (Camryn Grimes) will show up and she’ll lament the fact that she didn’t grow up with Cassie. Mariah will encourage Noah to reach out to Courtney’s parents again and learn where she’s buried. Noah will eventually make his way to the merger party where he’ll overhear Nick (Joshua Morrow) talking about the news of Sage’s (Kelly Sullivan) baby. Noah will be stunned, but he’ll offer his congratulations. Nikki (Melody Thomas Scott) will make it clear to Sage that she doesn’t approve of her. When they all toast, Nikki will decline. Sage will say there’s no need to opt out on her account, but Nikki will snap back that AA wouldn’t approve.

Nikki will see Dylan (Steve Burton) and start harping about his new relationship with Sharon (Sharon Case) as well as Nick getting saddled with Sage. Sharon will come over and tell Nikki to back off since it’s the anniversary of Cassie’s death. Later, Dylan will take Sharon home and she’ll imply that she doesn’t let Nikki get under her skin. Sharon will say she knows she’ll always be involved with the Newmans because of her kids. Talk will turn to Dylan’s lack of children and Sharon will say he shouldn’t count anything out. Dylan will depart, but he’ll return shortly for a kiss.

Back at the party, Victor will drop some hints about Sage’s motive for being with Nick. Sage will dismiss the idea that she’s a gold digger. Sage turned down Gabriel’s (Justin Hartley) inheritance and she believes that Nick’s a good man. Lily (Christel Khalil) will rush in and tell everyone that there’s been a terrible car crash. When they learn Tobias was the victim, Kyle will go to the hospital with Summer and Abby to see if they can get some information out of him. Nikki, who’s been sneaking drinks all night, will slur statements about Victor making her sign away her soul. Nikki will leave the room and Neil will find her drinking with a man she just met. They’ll say they’re going upstairs for some fun, but Neil will try to stop them. When the man doesn’t back down, Neil will throw a punch. Later, Lily will question Neil about all his recent aggressiveness, but he’ll assure her it’s nothing to worry about.

Other “Young and the Restless” spoilers indicate that Kevin (Greg Rikaart) will look on Paul’s (Doug Davidson) computer to see what he can dig up. A police officer will catch him, but Kevin will say Paul asked him to check something. Mariah will arrive and express concern that Kevin lied to a cop. Kevin will give Mariah updates on what he just found. Tobias was on a list of disgruntled employees on Paul’s computer. They’ll decide to get to the bottom of all this by searching Tobias’ room. Kevin and Mariah will sneak in and find a 3-D printer along with some fingerprint molds. They’ll figure out that those were used to frame Sharon. Mariah will also discover the missing hard drives from the police station.

At the hospital, Summer will angrily question why Tobias lied to them. Tobias will tell Summer, Kyle and Abby that there’s something they need to know. Just as Tobias says Austin’s (Matthew Atkinson) name, he’ll start to code. Fake Jack will watch nearby and flash a sly smile. It sounds like fake Jack has a major scheme in play and has had for a long while. Y&R rumors say things will get pretty intense when the real Jack returns to Genoa City at the end of this coming week. Stick with the CBS soap to watch the two Jacks in a winner-take-all battle.