BY Heather Hughes on July 15, 2015 | Comments: 3 comments
Related : Soap Opera, The Young and the Restless 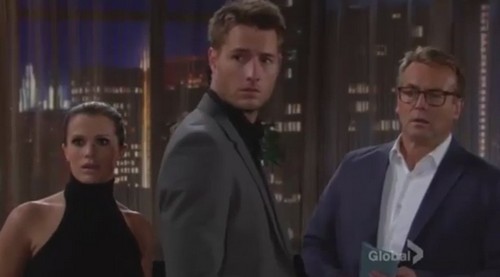 “The Young and the Restless” spoilers for Thursday, July 16, tease that Adam (Justin Hartley) will say goodbye to Connor (Michael and Nolan Webb) and Chelsea (Melissa Claire Egan). As Adam heads to Newman-Abbott to share his secret, Chelsea will stay behind and break down in tears. Meanwhile, Nick (Joshua Morrow) will question why Sage (Kelly Sullivan) is so upset. Sage will comment on how she never expected to meet someone like Nick or be able to have his baby. Nick will have to rush off to the meeting, but he’ll make sure Sage knows nothing will interfere with their family.

Once Nick is gone, Sage will write Nick a note and apologize for everything she’s kept from him about Adam. It appears Sage is planning on skipping town before Nick can rip into her. Sage will write that she’ll love Nick no matter where she is. At the meeting, everyone will gather around Adam as he prepares to make his big announcement. Just as Adam is about to spill the beans, Chelsea will rush in and tell him not to say another word. Adam will send everyone else out and ask why Chelsea changed her mind. Chelsea will suggest that coming clean would only cause more heartache. Chelsea will add that from now on, he’s just Gabriel and Adam is dead.

Stitch (Sean Carrigan) will be so excited about becoming a doctor again that he’ll lift Ashley (Eileen Davidson) up and spin her around. When Stitch says he wants to celebrate, Ashley will hint that Abby (Melissa Ordway) would like that idea. Stitch will admit that he hasn’t been able to find Abby to tell her yet. Later, Stitch will finally get in touch with Abby and she won’t be pleased that he told Ashley first. They’ll try to make plans, but their schedules will conflict. It sounds like trouble is brewing for Stitch and Abby’s relationship.

Other “Young and the Restless” spoilers reveal that Marisa (Sofia Pernas) will drop by to see Victor (Eric Braeden) and have a chat about their “mutual friend.” Marisa will bring up Marco (Peter Bergman) and how they teamed up to take down Jack (Peter Bergman). Victor will pretend he doesn’t know Marco and Marisa will comment on his rudeness. Marisa will say she’ll be back later and she’ll exit as Nikki (Melody Thomas Scott) arrives. Nikki will say that Phyllis (Gina Tognoni) gave her updates on the situation with Jack. Victor will insist that Gabriel has hidden another gun and is trying to frame him.

Marisa will walk in The Underground and see Sage’s note. A short time later, Marisa will give the letter back to Sage and let her know that she’s safe. Sage will want to know who she is, but Marisa will stay tight-lipped. After all, nearly everyone seems to have a secret in Genoa City. Y&R rumors hint that the news about Gabriel’s true identity will eventually blow up in a big way. Stay tuned to “The Young and the Restless” to see just how huge this bombshell will be.

So Y&R fans, what do you think about Chelsea’s decision to stop Adam? Did Chelsea do the right thing? What about Sage’s role in all of this? Will Nick be furious when the truth comes out? What does Marisa have up her sleeve? Let us know what you think in the comments below and don’t forget to check CDL tomorrow for the latest “Young and the Restless” spoilers, rumors, updates and news.