‘The Young and the Restless’ Spoilers: Does Sage Kill Avery – Murder to Stay in Control of Nick, Distance Faith and Sharon? 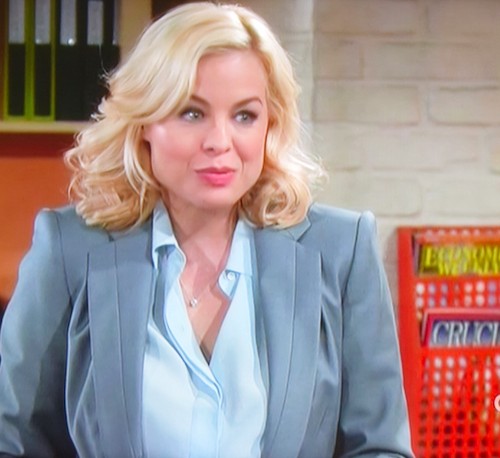 “The Young and the Restless” spoilers reveal that Jessica Collins will soon exit the role of Avery. The question is: how will Avery be written out? Recent Y&R rumors hinted that “The Young and the Restless” head writer, Chuck Pratt, pitched a storyline that was so over-the-top that he was forced to change it. Pratt will have to take a different direction, but his next idea could still be pretty horrific. Word has it that Avery may be killed off, which means we have to think about who would want to do it and why. If you’re looking for a good suspect, look no further than Sage (Kelly Sullivan).

Sage has proven that she’ll stop at nothing to get what she wants. This woman put her dead husband’s face on a stranger for crying out loud! From the moment Sage came on the scene, she’s been obsessed with money and power. Now that Sage is supposedly carrying Nick’s (Joshua Morrow) child, she believes she can have it all. Of course, Sage has to get pesky Faith (Aly Lind) out of the picture first. Sage has already set the wheels in motion by pushing Nick to give Sharon (Sharon Case) more visitation rights. Sage may want her own baby, but you can bet that she doesn’t want Nick’s child from a previous relationship around to cramp her style. It seems that Sage expects Nick to devote all his attention to her and she’s well on her way to achieving that goal. Unfortunately, Avery could force Sage to make some updates to her plan.

When Avery tried to talk Nick out of letting Faith spend some nights with Sharon, Sage shot her some dirty glares. If looks could kill, Avery would be dead already. Perhaps Sage will continue to push Nick on the issue of shared custody until he finally caves and agrees to an equal split with Sharon. Naturally, Avery would say Nick was nuts. If Avery were to change Nick’s mind, it could mean bad news. Sage has already shown flashes of dangerous rage. For example, whenever Adam (Justin Hartley) dares to suggest that he could be her baby’s father, Sage looks like she’d like to kill him with her bare hands.

Pratt has said in interviews that he loves writing crazy women and Sage may be the next soapy female who’s a few fries short of a Happy Meal. It’s not a stretch to think Sage could kill Avery in a fit of insane anger. Sage would probably try to cover up the murder and add it to her list of lies. Make no mistake: Sage is a liar and a manipulator. Could Sage be a killer, too? Stay tuned to “The Young and the Restless” to see if Avery might bite the dust for screwing up Sage’s scheme.

So Y&R fans, what do you think about the idea that Sage could kill Avery? Is Sage is capable of sinking that low? Do you have any ideas of your own on how Avery might be written out? Let us know what you think in the comments below and don’t forget to check CDL tomorrow for the latest “Young and the Restless” spoilers, rumors, updates and news.