The Young and the Restless Spoilers: Does Sharon Cause Sage Miscarriage After Paternity Test? 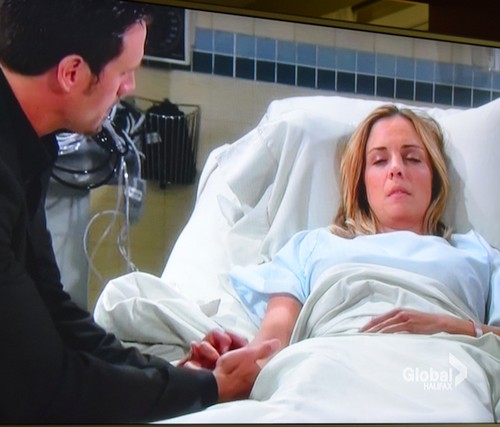 The Young and the Restless spoilers are dishing on some new rumors that involve two of Nick Newman’s [Joshua Morrow] former lovers. Recently Sage Warner [Kelly Sullivan] told her boss and lover, she was pregnant carrying his child. This news was supposedly a miraculous blessing to the mother to be Sage, who had supposedly been told earlier in her life she would never be able to have children.

All the while Sage goes on and on to Nick about their love child and plan for the bundle of joy’s future, she and Adam Newman [Justin Hartley], Nick’s half brother, know the unborn baby she is carrying, might in fact be his. Newly revealed Young and the Restless Spoilers reveal that a paternity test pushed for by Adam himself, may confirm Sage’s worst fears, that her child’s father is indeed Adam and not Nick! Additionally, we are learning that upon such news Sage keeps the true identity of the father to herself as she continues to insist that Nick is the father of her baby.

One other major stumbling block in Sage’s way to total bliss with Nicholas, is Nick’s ex wife Sharon Newman [Sharon Case]. Even though Sharon claimed to be delighted to hear the news of her daughter Faith becoming a big sister, some say that deep down, Sharon is filled with rage and jealously.

According to more Y&R late breaking news, Sharon finds out about Sage’s secret paternity test. She is rumored to confront Sage about the true identity of the baby’s father and who else the real father could be. Apparently, things escalate and turn out of control as Sharon continues to badger a fragile Sage about exposing the real father of her child. Shortly afterwards, Sage frantically reaches out to Nick about her nasty confrontation with Sharon.

Things continue to spiral out of control, as Sage starts having excruciating abdominal pains and Nick races her to the emergency room fearing the worse. Tuesday’s spoilers for June 2 intimate that Sage might truly be having a miscarriage – or would she cry wolf just to get Sharon in more hot water with Nick and keep her off her back?

How will Adam react to Sage’s news? Sharon is more determined than even to expose the real truth concerning the paternity of Sage’s baby. If she does uncover the truth, will anyone even believe Sharon after she changed Summer’s [Hunter King] paternity results? This looks to be a very interesting storyline with many apparent outcomes. We love to know, are you #TeamSharon or #TeamSage? Come back to CDL for more The Young and the Restless spoilers and updates soon!