BY Heather Hughes on May 29, 2015 | Comments: 2 comments
Related : Soap Opera, Spoiler, Television, The Young and the Restless 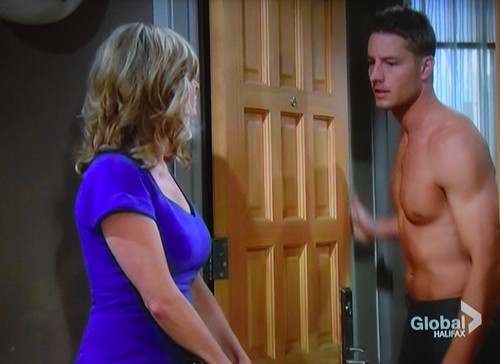 “The Young and the Restless” spoilers for Friday, May 29, reveal that Jack (Peter Bergman) will wake up on a cargo ship in the middle of the ocean. Kelly (Cady McClain) will appear and say that she won’t be gotten rid of that easily. Kelly will hint that Jack will have to watch his back. Jack will reach to grab Kelly, but she’ll suddenly disappear. When he hears someone coming, Jack will hide and watch a man retrieving money and drugs. Once he thinks the coast is clear, Jack will come out. Unfortunately, he’ll be spotted and bashed over the head. When he regains consciousness, Jack will offer to pay the man if he’ll help him get back home. The thug will snap back that he knows Marco has his money and he wants it back. Jack won’t understand what’s going on and he’ll try unsuccessfully to convince the guy that he’s really Jack Abbott.

Back in Genoa City, Ashley (Eileen Davidson) will be leery of the way Jack’s doppelganger has been helping Chelsea (Melissa Claire Egan) and Gabriel (Justin Hartley). Victor (Eric Braeden) will arrive and echo Ashley’s suspicion. Fake Jack will assure them that he knows what he’s doing. Something’s up with Gabriel and fake Jack intends on finding out what it is. When Ashley leaves, Victor will argue with fake Jack about his recent actions. The fact that fake Jack showed up at Nikki’s (Melody Thomas Scott) intervention certainly didn’t please Victor. Fake Jack will say that he loved a woman who struggled with addiction and he helped her through it. However, they were forced to part ways due to fake Jack’s dangerous enemies. Later, the island police will inform Victor that Jack is on a ship that’s likely headed to Peru.

Gabriel will catch up with Chelsea and once again try to convince her of his love. Gabe will gush about Chelsea’s beauty and their deep connection. Gabriel will also talk about their friendship and how they’re great lovers. After Gabriel says he wants to be in Chelsea and Connor’s (Michael and Nolan Webb) lives, he’ll pull Chelsea close for a kiss. The passion will be intense and they’ll end up sleeping together. When they’re done, Chelsea will say that she can’t promise anything. Gabriel will say that he can’t replace Adam, but he won’t allow anyone to come between them. Chelsea will leave the room to get dressed and Ashley will show up at the door. Ashley will caution shirtless Gabe about office romances. Ashley will add that she’s a bit jealous since everyone else around her seems to be finding happiness. Once Gabriel leaves, Chelsea will bicker with Ashley over business.

Other “Young and the Restless” spoilers tease that Stitch (Sean Carrigan) will tell Abby (Camryn Grimes) that Ashley still has feelings for him. Abby will be upset and hint that this could be a deal-breaker. Abby won’t want to hurt her mother, but Stitch will assure her that his fling with Ashley was a mistake. At the lab, Abby will admit to Ashley that Stitch told her how she’s feeling. Ashley will ask to speak to Stitch alone and she’ll rip into him for spilling her secret. While they’re talking, Ashley will drop a pill bottle and Stitch will grow concerned. Stitch will say that it’s serious medication and he’ll demand to know what’s wrong. Ashley will brush it off and indicate that Stitch is just looking for trouble.

Later, fake Jack will try to talk Gabriel into smoothing things over with Billy (Burgess Jenkins). Gabe will balk at the idea and wonder what would happen if Billy knew who he really was. Gabriel will add that making peace with Billy isn’t believable. Fake Jack will say that his partnership with Victor isn’t believable either. Gabriel will agree that fake Jack has done a good job of putting on a show when he knows he hates Victor. Gabe will add that no one wants to bring his father down more than him. Bingo! This is the info fake Jack has been waiting for. Fake Jack will bring up Chelsea and Gabe will mention Adam Newman casting a long shadow. It’s official: Gabriel’s secret is out.

Fake Jack will go to Victor and tell him that he knows who Gabriel Bingham really is. Is Victor about to learn that Gabriel is actually Adam? Meanwhile, Gabriel will meet up with Chelsea. When he says that Jack understands him more than Victor ever has, Chelsea will remark that he just reminded her of Adam. Y&R rumors say that all of Genoa City will get updates on Gabriel’s true identity soon. Stick with the CBS soap to see who will reveal the shocking news.