The Young and the Restless Spoilers: Is Phyllis Pregnant by Marco – Will Drug Lord Baby Crush Jack’s Marriage?

BY Janette E Smith on May 27, 2015 | Comments: 9 comments
Related : Soap Opera, Spoiler, Television, The Young and the Restless 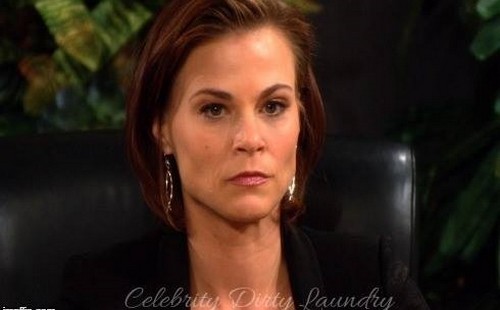 The Young and the Restless spoilers ask the obvious question everyone has been worrying about – would TPTB at Y&R get Phyllis pregnant with pyscho murderer Fake Jack’s baby? Since Phyllis [Gina Tognoni] and Jack [Peter Bergman] were married on St. Barts Phyllis has been on nothing short of a never ending honeymoon in the bedroom. Yes what a wonderful thing it is to live that way with the love of your life…or is it? As most diehard Y&R fans know Jack Abbott was kidnapped minutes after his quickie wedding – as fast as the Dutch Clergy could say ‘Phyllis and Yack go with the ghost’ Real Jack was gone!

Out with old Jack and in with the new Jack… the problem is Phyllis has no idea she is literally being ravished by an imposter, maybe she is so high on the excitement of all of the carnal attention that she has chosen to ignore the fact that her bedmate is not her soulmate Jack Abbott – YIKES! In the beginning Phyllis basically had to ward Marco off because he couldn’t keep his paws off of her – but what do we expect from a newly released Drug Lord who was doing hard time in a Peruvian Prison? No conjugal privileges for mean old Marco!

Phyllis has now succumbed to his advances numerous times and seems to actually love it! Phyllis is being fulfilled in every way imaginable by Fake Jack AKA Marco Anicelli. But lately Phyllis has witnessed some disturbing behavior on Fake Jack’s part. He has been speaking fluent Spanish in his sleep, saying Victor’s name in his nightmares (actually don’t many GC residents do that… just kidding!) AND perhaps worst of all he seems to be having problems remembering important events in their life together. Phyllis is pretty sharp but it is taking her rather long to figure this imposter out BUT the good news is she does find out.

A whole new set of Y&R problems and dramatic struggles will ensue when her real husband comes back and the dust is settled from this horror story. Sources say Phyllis will end up pregnant with the drug lord murderer’s baby!! Everyone in Genoa City will have lots to contend with when this revelation is made especially Phyllis and Jack. Jack will already have a problem with the fact that his darling wife was sexing a stranger like a wanton rabbit and somehow didn’t notice it was not him, but now the poor cuckold is faced with his new bride pregnant with the demon spawn of Marco!

Phyllis and real Jack will discuss this pregnancy and how to handle it but we anticipate the fallout will be nothing nice. This will cause a huge rift between the newlyweds and we have to wonder if they’ll be able to survive this blow? Will Victor Newman (Eric Braeden) finally succeed in ruining Jack’s life as he has always intended? Stay tuned to CDL for more The Young and the Restless spoilers and watch this shocking storyline unfold!