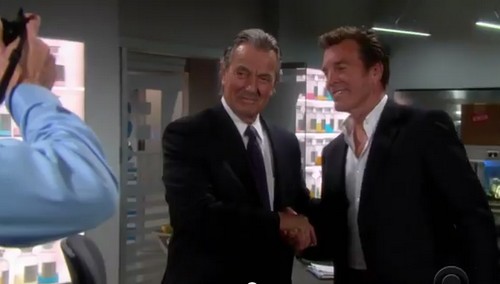 “The Young and the Restless” spoilers for Monday, April 20, tease that several plans will move forward. Jack (Peter Bergman) will remain tied up and he’ll scream that he’s made his choice. Phyllis (Gina Tognoni) is the one Jack wants. Jack will yell that if Kelly (Cady McClain) really loved him, she’d let him go. John (Jerry Douglas) will appear as an apparition to give Jack some fatherly guidance. Jack will say he has to get out of there. Victor (Eric Braeden) could have done something to Phyllis. John will imply that Jack always blames his problems on Victor and look where that’s gotten him. Jack needs to use his head and beat Victor at his own game. When John disappears, Jack will indicate that things seem hopeless. Jack will mutter to himself that he’s being held captive by a man he knows too well and a woman he didn’t know at all. John will reappear and say there may be hope for “Jackie.” John will make some comments about Houdini and encourage Jack to concentrate. Jack will get free from his restraints and walk to the door. When Jack opens it, he’ll look out in shock.

Meanwhile, fake Jack will return home to chaos. Victor will say that Jack was responsible for the hack and he has proof. Fake Jack will indicate that he’ll call his lawyer. Ashley (Eileen Davidson) and Billy (Burgess Jenkins) will wonder what’s up, but Jack will say they need a trip to the islands to give them a new perspective. Ashley will insist they should act fast or they’ll have to make a deal with Victor. Jack will wonder it that’s such a bad thing and he’ll add that life’s too short to be worried about corporate rivalry. Ashley will be adamant that she’s not going to let Jack ruin everything. Later, Jack will confess to Phyllis that he hacked into the Jabot and Newman servers to get Victor’s secret weapon. Victor thinks he has it all worked out, but the rumors say the imposter will go rogue soon. Stick with CDL for Y&R updates as the doppelganger storyline continues.

Other “Young and the Restless” spoilers reveal Joe (Scott Elrod) will get the news that his nervous system has severe damage and he’s being transferred to a therapeutic center. Joe will think his doctors want him to learn to live without being able to walk. Avery (Jessica Collins) will indicate that it’s all her fault, but Joe will say he doesn’t need her pity. Joe will tell Avery to put him in her rear view and go. When he’s alone with Dr. Shelby (Terrell Tilford), Joe will admit that he can live without his legs, but not without Avery.

Paul (Doug Davidson) will show Dylan (Steve Burton) a cover story that was done on Sharon (Sharon Case). Dylan will defend Sharon’s innocence and Paul will say that Dylan is obsessed with saving her. It’s clear that Paul thinks Dylan has become too involved and it could hurt Avery. Dylan will insist that Sharon is being framed and Paul will say he’ll end up in jail if he doesn’t stop interfering.

At ADA Winston Mobley’s (Ryan Caltagirone) apartment, Hilary (Mishael Morgan) will wish him luck with his case. Hilary will go to the athletic club and ask Devon (Bryton James) about Neil (Kristoff St. John). Devon will urge Hilary to show Neil some compassion and add that Neil stopped drinking. In the courtroom, Christine (Laralee Bell) will discuss the baby she lost and the fact that she can no longer bear children. Leslie (Angell Conwell) will question Christine about why she was in the path of Nikki’s (Melody Thomas Scott) vehicle that night. Christine will indicate that she was upset on the way to her car. Leslie will accuse Christine of putting the blame on Nikki because she had a child by her husband and Christine didn’t. Christine will become distraught and leave Paul to testify for her.

When Nikki is on the stand, Winston will imply that she and Neil were just two drunks who didn’t care who got in their way. Nikki will get defensive and argue that she’s a recovering alcoholic. Neil will take the stand and say that it was the alcohol that made him grab the wheel. Neil will be adamant that his own sickness is what caused the accident and the prosecution will rest. Winston will be shocked when the defense calls Mrs. Neil Winters as its first witness. Hilary will flash a devious smile as she swears to tell the truth. It seems everything is going according to plan for Hilary.