‘The Young and the Restless’ Spoilers: Drunk Nikki’s Hotel Hookup – Joe’s Pact with Sharon to Keep Dylan and Avery Apart

BY Heather Hughes on May 27, 2015 | Comments: 3 comments
Related : Soap Opera, Spoiler, Television, The Young and the Restless 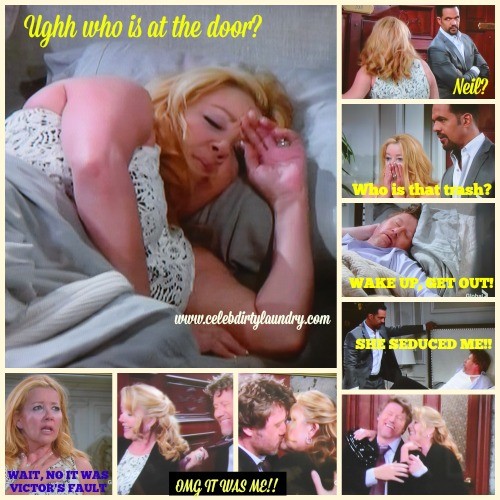 “The Young and the Restless” spoilers for Wednesday, May 27, reveal that Neil (Kristoff St. John) will find Nikki (Melody Thomas Scott) at the athletic club and he won’t like what he sees. The man Nikki was drinking with will be in her bed. Neil will say that Nikki is married and he’ll throw the guy out. Nikki will insist that Victor (Eric Braeden) is to blame for all of this and she’ll call security. The guard will come and take Neil away. When Nikki is alone, she’ll find a bottle of vodka and look at herself in the mirror. Meanwhile, Victoria (Amelia Heinle) will express concern over Nikki’s drinking. Billy (Burgess Jenkins) will say that Nikki has to want help, but Victoria will believe that something has to be done.

Sage (Kelly Sullivan) will confess to Nick (Joshua Morrow) that she’s concerned about becoming a mother. Nick will assure Sage that he’ll be there for as she makes updates to her life. Victoria will call Nick and he’ll meet up with her to discuss Nikki’s recent drunkenness. Neil will join the conversation and say that he’s been in touch with a therapist that can help Nikki. However, it’s crucial that they stage an intervention right away. They’ll go get Nikki and insist that she should join them for dinner at the ranch. Neil will also stop by the lab and ask Phyllis (Gina Tognoni) to tell Jack (Peter Bergman) about the intervention. Nikki is going to need all the support she can get.

Other “Young and the Restless” spoilers tease that Phyllis will try to convince Dylan (Steve Burton) that he needs to get back together with Avery (Jessica Collins). Dylan will hint that Avery was the one who ended their relationship and it really is over. After Phyllis leaves, Sharon (Sharon Case) will approach Dylan and wonder if Phyllis thinks she’s manipulating him. Dylan will reply that he doesn’t care what anyone thinks because he knows Sharon is a good person. Since Dylan needs a place to stay, Sharon will offer to let him move in with her. Dylan won’t be sure they could take that step just yet. However, Y&R rumors say that Sharon and Dylan will continue to grow stronger as a couple over the next few months. They could be moving in together before you know it.

At Avery’s place, Joe (Scott Elrod) will say he can crash on the sofa. Joe will stumble as he’s getting out of his wheelchair and Avery will help him. They’ll lock eyes and share a close moment. Phyllis will arrive and she won’t be pleased with the news that Joe is staying there. Avery will urge Phyllis to back off and let it go. Joe and Avery will go to the rooftop of the athletic club and they’ll see Dylan with Sharon. Avery will take Dylan aside and try to explain that she’s not sleeping with Joe. Dylan will say that it’s none of his business what Avery does.

As Dylan and Avery talk, Sharon and Joe will have a chat. Joe will say that Avery is good for him and Dylan is good for Sharon. Joe will suggest they make a pact to ensure that Dylan and Avery don’t mess everything up. Back at home, Avery will urge Joe to take the bed, but he’ll insist on being a gentleman and sleeping on the couch. When Avery leaves him alone, Joe will stand up and steady himself with the table. It looks like Joe is a bit further along in his recovery than Avery realizes. Will Joe’s scheme to win Avery back work out for him? Stick with the CBS soap to see if Avery will soon be under Joe’s spell.