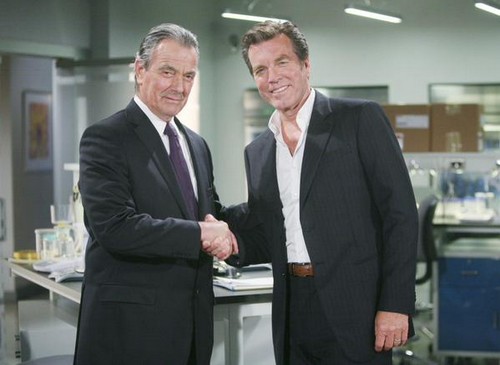 “The Young and the Restless” spoilers for Thursday, April 23, tease that Jack’s (Peter Bergman) doppelganger will continue to stir up trouble. Fake Jack will tell Ashley (Eileen Davidson) that she can either support him or join Billy (Burgess Jenkins) in seeking employment elsewhere. Victor (Eric Braeden) will say that Ashley is one of the best in the business and they wouldn’t want to lose her. However, it’s clear that major updates are coming for the company. Jabot will now be known as Newman Abbott. Victoria (Amelia Heinle) is going to be the COO and Ashley won’t be happy about working under her. Nevertheless, Ashley will indicate that she’ll stick around to fight for her father’s legacy. Victoria will rub in her new position by taking Ashley’s office for herself.

Phyllis (Gina Tognoni) and Kyle (Lachlan Buchanan) will chat about Jack’s strange conduct. Kyle will be concerned about Jack having a drink and he’ll question Phyllis about the merger. Phyllis will encourage Kyle to trust in Jack’s vision. Billy will join them and insist that he’ll show Jack the error of his ways. Meanwhile, Victor will take fake Jack aside and urge him to stop acting so cocky. Victor will indicate that his face may look like Jack Abbott, but his behavior suggests otherwise. Jack’s doppelganger will imply that he has everything under control, but Victor will be adamant that he’s the one calling the shots. Fake Jack will go back to the Peruvian prison Victor found him in if he doesn’t straighten up. In a moment alone, Kyle will ask fake Jack if he has a plan. The imposter will reply that the merger is about more than anyone knows, including Victor. The rumors say fake Jack’s cockiness could get in the way of Victor’s grand scheme. Stick with Y&R to see how long it takes their plot to fall apart.

Other “Young and the Restless” spoilers hint that Stitch (Sean Carrigan) will waste no time moving on from Victoria. Stitch and Abby (Melissa Ordway) will make love before heading to a meeting. Once they arrive, they’ll get the news that Victoria is in charge. Victoria will call them into her office one by one, starting with Stitch. While Victoria takes jabs at him for moving on so quickly, Ashley will blast Abby for showing up late with Stitch. When it’s Abby’s turn to see Victoria, she’ll indicate that she knows it’s awkward. Victoria will say that she just wants Abby to be punctual and refrain from focusing on her personal life. Ashley will chastise Stitch for jumping in bed with Abby immediately after breaking up with Victoria. Since Victoria will inevitably give Stitch a hard time at work, Ashley will suggest that Stitch might want to quit. Later, Abby will tell Stitch that maybe they should have waited, but he’ll plant a kiss on her as Victoria watches nearby.

Chelsea (Melissa Claire Egan) will call Gabriel (Justin Hartley), who hasn’t been answering lately. Chelsea will leave a message that she’s sorry there can’t be more between them, but if Gabe values Jack as a friend, he should come home. Gloria (Judith Chapman) will stop by and they’ll talk about Jack’s deal with Victor. Gloria will urge Chelsea to be careful and she’ll hint that Victoria will have something to prove now that she’s in control. Chelsea will pay Victoria a visit to make sure she knows how much her line is worth. Chelsea will add that she has other offers, but Victoria will say she knows she’d be stupid to let Chelsea’s line go. Victoria intends on keeping Chelsea around, but it’s tough to believe it will be smooth sailing from here. More drama is on the way so Y&R viewers will want to stay tuned.