‘The Young and the Restless’ Spoilers: Kelly’s Descent Into Madness – Always Crazy or Pushed Over the Edge – Final Outcome? 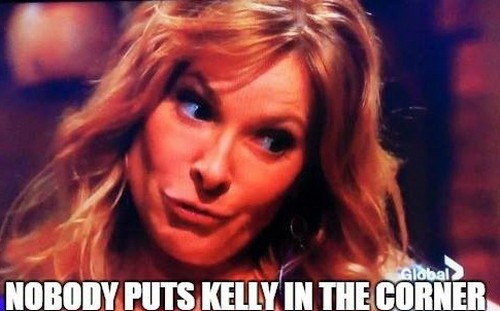 “The Young and the Restless” spoilers reveal that Kelly’s (Cady McClain) craziness could reach a new extreme in the near future. It’s clear that Kelly is really going off the deep end, but it may not be entirely her fault. From the moment Kelly arrived in Genoa City, she’s been a bit of a mystery. Was Kelly a nut job before she came to town or did the actions of other Y&R characters push her over the edge? It’s almost a case of which came first: the cuckoo bird or the crazy egg.

When Kelly first showed up, she was a loner who was grappling with the death of her son by a drunk driver. That alone is enough to make a person unstable. Everyone chalked up Kelly’s cagey behavior to grief, but she was probably already descending into madness. Kelly bonded with Billy (Burgess Jenkins), who was also dealing with the loss of a child, and the pair ended up sleeping together in the heat of the moment. When the truth came out, Kelly was labeled with a scarlet letter for breaking up Billy’s marriage to Victoria (Ameila Heinle). Kelly became attached to Billy in a short amount of time, but Billy shut her down. It seems like Kelly always goes all in on relationships that are destined for failure.

That brings us to Jack (Peter Bergman). In the past, Kelly has done a good job of saying all the right things to make herself appear semi sane. When Kelly and Jack first got together, Jack was still pining for a comatose Phyllis (Gina Tognoni). Jack was probably just using Kelly to cope, but Kelly doesn’t do casual. It wasn’t long before Kelly went into full-on stalker mode. Once Phyllis came out of her coma, Jack continued to see Kelly and didn’t tell that he’d chosen Phyllis. Of course, the truth always comes out on “The Young and the Restless.” Phyllis realized what was going on and she decided to make Jack’s choice known by asking Kelly to plan their wedding. Kelly was devastated by the news and it sent her one step closer to the edge.

Kelly continued her trip to crazy town over the next few months until she finally reached a tipping point. Kelly tried to make it look like Phyllis poisoned her and it became clear that Kelly is capable of anything. Victor (Eric Braeden) used Kelly’s insanity against her by giving her false hope through her romp at The Underground with fake Jack. Then, Victor took it one step further by promising Jack as Kelly’s grand prize for getting Phyllis off the hook. Kelly is now convinced that she can win back Jack and she’ll stop at nothing to get what she wants. Ultimately, Kelly has always been leaning toward madness, but the people in her life are at least partially responsible for sending her crashing down. The rumors say Kelly is only going to get crazier from here. Stick with “The Young and the Restless” to see if how far Kelly will go.

So Y&R fans, what do you think about Kelly’s crazy behavior? Has Kelly always been this way or do you think everyone has been preying on her instability? Will Kelly ever make updates to her life in the form of professional help? What will be the outcome of crazy Kelly as madness takes firm hold? Let us know what you think in the comments below and don’t forget to check CDL tomorrow for the latest “Young and the Restless” spoilers, rumors, updates and news.