‘The Young and the Restless’ Spoilers: Jack Fights For His Life, Chelsea and Victoria Fight, Dylan Saves Sharon

BY Amanda Austin on May 4, 2015 | Comments: 5 comments
Related : Soap Opera, Spoiler, Television, The Young and the Restless 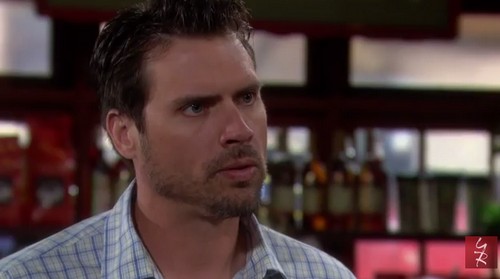 “The Young and the Restless” spoilers tease that the week of May 4 – 8 will be packed full of exciting drama and according to Y&R rumors fans of the CBS soap opera will not want to miss a single episode. The fallout from Billy and Chelsea’s botched wedding and Chelsea’s affair with Gabe will continue to unravel during the week of May 4, and according to Y&R spoilers there will be some major confrontations.

“The Young and the Restless” spoilers tease that much to Victoria’s dismay Chelsea accepts Victor’s (Eric Braden) office to work for his company – the two women have fighting words when they bump in to each other at work and all hell breaks loose. Chelsea (Melissa Claire Egan) is furious that Victoria kissed Billy, and Victoria (Amelia Heinle) screams at Chelsea for cheating on Billy with Gabe (Justin Hartley). Meanwhile, at Chelsea’s house, Billy (Burgess Jenkins) arrives to pack up his things and runs in to Gabriel – the two men come to blows and a huge fight breaks out.

In other “The Young and the Restless” news, the Genoa City killer is still at large but spoilers tease that during the week of May 4 Kevin uncovers some evidence that could get Sharon Newman (Sharon Case) off the hook. Sharon’s ex Nick (Joshua Morrow) isn’t ready to admit that Sharon is innocent, but with Dylan (Steve Burton), Mariah (Camryn Grimes), and Noah in her corner it looks like she is about to dodge the murder charges. While Dylan is coming to Sharon’s rescue once again, spoilers tease that sparks will fly between them and they will grow even closer.

“The Young and the Restless” spoilers for May 4-8 also tease that Y&R fans can expect to see Jack fighting for his life. Joe Clark (Scott Elrod) pulls out all the stops and is determined to romance Avery while Dylan is off with Sharon. Also, spoilers hint at a major milestone for Devon (Bryton James) and Hilary (Mishael Burton), during the week of May 4 they sit down to discuss their relationship and whether or not they have any future together.

So Y&R fans, do you think that Chelsea will wind up with Adam Newman? Will the real Jack (Peter Bergman) make a getaway from Kelly (Cady McClain)? If Sharon is off the hook for the murder – does the evidence that Kevin finds finally point to the real killer? Who do you think it is? Will Sharon and Dylan be a couple by the end of the week? Let us know what you think in the comments below and don’t forget to check CDL tomorrow for more “The Young and the Restless” spoilers and news.