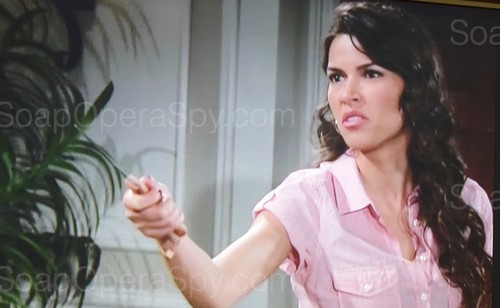 “The Young and the Restless” spoilers for Thursday, August 6, tease that Victoria (Amelia Heinle) and Victor (Eric Braeden) will wonder where Gabriel (Justin Hartley) is. Billy (Burgess Jenkins) will think he has a pretty good idea. A voicemail from Chelsea (Melissa Claire Egan) will clue them in on the fact that she needs some space from Gabe. Billy will declare that he’s going to take Gabriel down and Victoria will tell him to give it a rest. Victoria will add that Billy is just as focused on Gabe as he was on Adam (Justin Hartley). Billy will confess that Victoria is right and he’ll suggest that he needs something to keep his mind off his obsession.

Chelsea and Connor (Michael and Nolan Webb) will be relaxing in Paris when the phone rings. It’s Adam, who wants the opportunity to prove his love. Chelsea will hang up on Adam, but he’ll call again. A short time later, Adam will meet with Chelsea and beg her to stay with him in Paris. Adam will want Chelsea to leave Genoa City behind, but she’ll think it’s a crazy idea. Chelsea will believe Adam would never be able to let go of getting revenge on Victor. Adam will insist that he’ll do anything for Chelsea and he just wants another chance.

Jack (Peter Bergman) will shoot down the idea of posing as Marco (Peter Bergman) to get inside info from Marisa (Sofia Pernas). After all, Jack has never actually met Marco. Phyllis (Gina Tognoni) will say she’s spent a lot of time with Marco and he tends to be bolder. Marco definitely has an in-your-face kind of demeanor. Jack will reluctantly agree to try being more aggressive so they can trick Marisa. Meanwhile, Noah (Robert Adamson) will question Marisa about her past. Marisa will swear that she’s being honest. Marisa will vow to help Noah get justice if Marco returns.

“The Young and the Restless” spoilers reveal that Jack will show up at Marisa’s door. When Jack claims he’s Marco, Marisa will pull a knife on him. Marisa will say that the only way to guarantee everyone’s safety is if Marco dies. Jack will have no choice but to admit who he really is. Jack will apologize for deceiving Marisa, but he had to make sure she wasn’t in cahoots with Marco. Marisa will get the news that Marco came back to town, but she won’t know where he’s gone.

At the police station, Detective Harding (Chris McKenna) will give Noah updates on the sketch from Marisa. They’ve learned it’s the captain of the cargo ship instead of Marco. Harding will want Noah to pump Marisa for information. They’ll argue until Harding says Noah needs to remember Courtney (Kelli Goss) by seeking justice. Noah will return to Marisa’s room and demand to know if she’s protecting Marco. Marisa will defend her innocence and imply that they really don’t have a relationship if Noah doubts her.

Victoria and Billy will bond as they spend some time with Johnny (Holden and Ryan Hare). Billy will talk about how he’s beginning to realize what’s really important in life. One thing will lead to another and they’ll end up sleeping together. Afterwards, Victoria will say it felt like more than just sex with an ex. They’ll agree that they’ve been moving toward reuniting for a while and they’ll continue to do so.

Phyllis will get into a huge confrontation with Victor about Marco. Victor will say he’s sorry about what Phyllis went through, but she needs to keep her mouth shut. Phyllis will snap back that she wants to bring Victor down. Jack will appear and Victor will indicate that it was a mistake to tell Phyllis the truth. Jack will think it helped Phyllis when Marco returned, but Victor will insist that it’s only put her in more danger than ever. Y&R rumors hint that Marco is about to make a daring move. Stick with the CBS soap to see if Jack and Phyllis can stay ahead of the game.