The Young and the Restless Spoilers: Patty Williams Back Seeking to Destroy Jack and Phyllis – GC Becomes Crazy Town 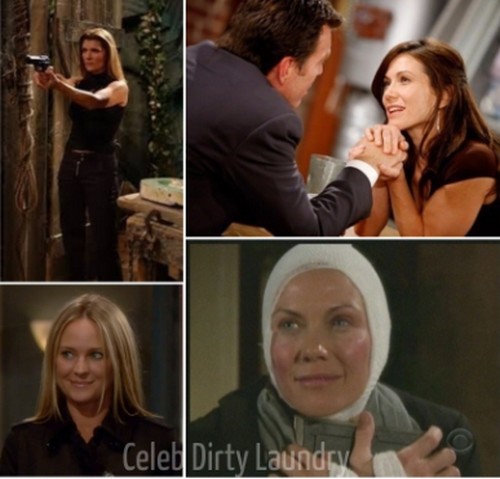 The Young and the Restless spoilers discuss the return of Patty Williams (Stacey Haiduk) to Y&R and all that this implies for the future. What goes through these writers heads when coming up with the recycled storylines? Do they think because they were not the writers who wrote the last doppelganger or plastic surgery story it never happened or they can rewrite history?

On Monday’s Y&R episode Phyllis (Gina Tognoni) came face to face with Marco Anicelli (Peter Bergman) but she could not tell the difference between Marco and her husband Jack Abbott (Peter Bergman). Jack and Phyllis had a code word in case Marco reared his ugly head again she uses it and learned then that imposter Jack was Marco.

Does any of this sound familiar with the two Jacks – Phyllis not being able to tell them apart? It should be familiar because Phyllis was a victim of this same demented storyline in 2006.

In 2006 the evil Sheila Carter (played by Kimberlin Brown) – [see about the come back of Sheila on CDL] – was out to destroy Lauren Fenmore (Tracy E. Bregman) and guess what, she had plastic surgery to look exactly like Phyllis Newman Abbott. The show down came when evil Sheila/Phyllis kidnapped Baby Fen (Max Ehrich) and Summer (Hunter King) Lauren showed up with a loaded gun but could not tell the two Phyllis’s apart.

Is this where Y&R is heading again, YET ANOTHER doppelganger showdown between Jack and Marco when not even Jack’s own wife can tell them apart?

The question will be how long will this lame story drag on for and who will be the one to save the day? Y&R seems to lean towards the same story – one after the other. On Tuesday Aug 4 episode you would think you were back at the Cabin with the Scooby Gang there is a big bad thunder/lightning storm and we watch yet again Mariah freaking out Kevin calming her down – then we see good ole whiny Summer trying to be Velma the smart girl from Scooby Doo Mystery cartoon… all that is missing is a dog.

Will this storyline finally wrap up at the end of the month – only to have another FEMALE NUTCASE unleashed upon GC!!! Yes I said it, they are bringing in one of the original psychos Patty Williams (Stacey Haiduk)! Why bring more wackadoodles on the show when it is only a matter of time that Sharon goes sideways since she stopped taking her bi-polar meds. Soon there will be more crazies than sane people in GC.

Insane character Patty Williams, Paul William’s (Doug Davidson) crazy sister who has also had plastic surgery because of her obsession with Jack Abbott is sure to perfect for Chuck Pratt Jr who has stated he loves working with crazy female characters. Victor knew it just like he knew Kelly Andrews was obsessed and unstable – Victor brought her back in 2009 for what other reason than revenge – he paid for her plastic surgery and turned her loose on poor Jack again! Sound familiar? Patty hates Jack and Phyllis and even tried to kill Summer through a peanut allergy she suffered, putting the kid into a coma. The return of Patty Williams with the face of her psychiatrist means we are all going on another refurbished storyline ride – oh joy! Did we not just go through a long lame story line about a demented woman obsessed with Jack Abbott?

Jack definitely attracts the crazies. TPTB are trying to bring characters like Paul Williams to the frontline hence the return of Patty Williams. Patty Williams scenes will start shooting next week and will air in September. Could Patty be part of the Cabin Killer story because many have speculated that the black leather glove we saw chloroforming Sharon AND the hand that pulled the flash drive out of GCPD’s computer after Courtney (Kelly Gross) was killed looked like a woman’s hand. It is pretty obvious someone in the writing department has run out of stories. With rumors swirling that Y&R is bringing back old dead psychotic female characters what does this mean? The one thing it does mean is that TPTB are all out of originality.

How do you feel CDL’ers are you looking forward to crazy Patty Williams and a possible Sheila Carter return? Stay tuned to CBS’s Y&R as new revelations come to the forefront. Please leave your thoughts and comments in the CDL comments below