The Young and the Restless Spoilers: Justin Hartley and Melissa Claire Egan Explain Exactly How Adam Newman Reveal Goes Down 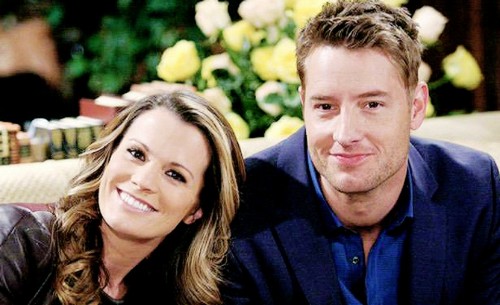 “The Young and the Restless” spoilers and news tease that the big Adam Newman reveal we have all been waiting months for is finally here, and on Monday July 13 Chelsea (Melissa Claire Egan) will learn that her husband is very much alive, and has been parading around Genoa City under the guise of Gabe Bingham (Justin Hartley). Since Gabe arrived on the CBS soap, Y&R fans have known his true identity, although his friends, family, and enemies had no idea that he was truly Adam Newman. But, all that is about to change.

“The Young and the Restless” spoilers tease that on July 13 Adam Newman will be feeling victorious, he is finally getting his life back. He has his wife Chelsea, his son Connor, and now he is interim CEO of Victor Newman’s company, he seems to have pulled off his entire scheme flawlessly. But, Gabe gets a little too cocky. According to Y&R spoilers from Michael Logan, Chelsea steps out of the office to use the restroom – an Gabe proceeds to gloat about his success, and brags to Victor’s photo on the wall. Chelsea overhears everything, and Gabe’s secret is out, she knows that he is Adam Newman!

Melissa Claire Egan and Justin Hartley sat down with TV Insider’s Michael Logan to share some spoilers for the upcoming reveal on “The Young and the Restless.” Obviously, we are all dying to know how Chelsea will react to the news that her husband Adam Newman is alive – and she has been having sex with him! Egan explained, “At first she’s confused. “Why would you say something like that?” There are a lot of emotions going on at once—so much shock and confusion—and then she goes on the defensive. “No! You can’t be Adam. I don’t believe you. They found the body!”

Eventually Chelsea puts two and two together, and realizes that Gabe might have a different face, but he is really Adam Newman. Then, she has to make a huge decision – will she expose him or help him keep his secret. According to Egan’s “The Young and the Restless” spoilers, at first she wants Adam Newman to come clean, but then she has a change of heart and in the long run agrees to keep the shocking secret to herself. Egan revealed, “At first, she wants Adam to confess to everyone, take responsibility for his actions and be a real father to his son, Connor. Then she starts to think about everyone this news will affect and some of the terrible repercussions. For example, Billy can’t get Delia back. Do we really want to open those wounds again? So she does agree to keep quiet…but we’ll see what happens.”

Chelsea Newman really has no choice but to keep her not-so-dead husband Adam’s dirty little secret, unless she wants to risk being widowed a second time around and raising her son Connor alone for good this time. If everyone knew Adam Newman was alive, it would only be a matter of time before someone tried to kill him again. Hartley dished to Michael Logan, “If this gets out, there will be a lot of unhappy people in Genoa City. Some will want Adam dead—for real this time.”

It sounds like “The Young and the Restless” fans are in for a huge treat next week on the CBS soap. Do you think Chelsea will forgive Adam for lying to her, or is their reunion over before it really started? Will she be able to keep his secret, or will the truth eventually come out? Let us know what you think in the comments below and don’t forget to check CDL tomorrow for more “The Young and the Restless” spoilers and news!