‘The Young and the Restless’ Spoilers: Nick Loses Custody of Faith – Chelsea Quits Job – Adam Slips Up with Fake Jack 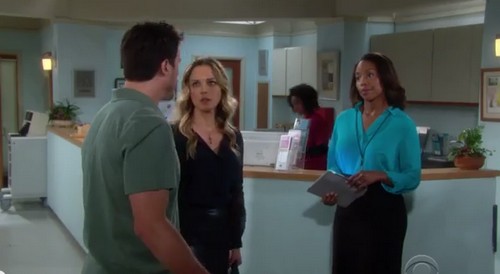 “The Young and the Restless” (Y&R) spoilers for Tuesday, April 28, tease that Gabriel (Justin Hartley) will question Billy (Burgess Jenkins) about Jack’s (Peter Bergman) bizarre behavior. Billy will mention that Jack gave him the boot and Gabe will be stunned that Jack chose Victor (Eric Braeden) over Billy. Talk will turn to Billy’s upcoming marriage to Chelsea (Melissa Claire Egan) and Gabriel will indicate that Billy shouldn’t push her to move too fast. Gabe will remind Billy that Adam was Chelsea’s love long before he was. Y&R fans know that Gabriel is actually Adam so he naturally wants to claim his rightful place as Chelsea’s husband. Unfortunately, it seems Adam’s plan will soon hit a snag.

Meanwhile, Nick (Joshua Morrow) will inform Sage (Kelly Sullivan) that he’s being sued by the reporter he punched. Nick’s need to protect Sharon (Sharon Case) probably won’t sit well with Sage. Chelsea will also question Sage about how Gabriel is doing after their split, but Sage won’t be worried about him. Sage apparently couldn’t care less about Gabe, but things could soon shift. “The Young and the Restless” spoilers hint that Sage and Gabriel will sleep together later this week.

Later, Nick will be called to the hospital to see Faith’s (Aly Lind) therapist. It seems Nick’s outburst frightened Faith. When the therapist advises that Faith should be placed in protective custody, Nick will get upset and shout that he won’t let her take his child away from him. Nick isn’t really helping his case as far as anger issues go. It looks like Nick will have to let a family member to take Faith in for a while. Sage will try to console Nick as he deals with the news.

Other “Young and the Restless” spoilers reveal that Dylan (Steve Burton) will discuss his doubts about his relationship. Sharon will encourage Dylan to hang in there, but it’s clear that Dylan feels Avery (Jessica Collins) is slipping away. Dylan will also share his regrets about never having the chance to be a father. Sharon will bring up the possibility that she could do prison time and she’ll ask Dylan to play a role in taking care of Faith. They’ll continue to bond throughout the evening and Sharon will be grateful for Dylan’s friendship. The rumors say that their friendship will soon turn to love. Stay tuned to the CBS soap to see if where things go from here.

Ashley (Eileen Davidson) and Victoria (Amelia Heinle) will argue over the packaging and intended demographic for Hex. Victoria will start making demands and Ashley will imply that she won’t be treated like an assistant. Victor and Victoria will share a moment alone and Victoria will hint that Phyllis (Gina Tognoni) has changed Jack. Victor will agree that Jack has been a different person since he got back from his honeymoon. A little later, Chelsea will grow angry when Victoria says she’ll have to start using focus groups to judge her work. Gabriel will step up for Chelsea as usual, but she’ll declare that she’s quitting. Victor, Ashley and Victoria will discuss the possible consequences of Chelsea’s departure as well as what Adam would think of Jack’s partnership with Victor.

Billy will have an argument with Jack’s doppelganger about his recent actions and the future of the company. Billy won’t know what’s up, but he’ll say that Jack isn’t acting like himself. After Billy storms out, Adam will pop in to ask fake Jack if he’s lost his mind. When fake Jack tries to defend Victor, Adam will wonder if he’s high. Adam will ask about the plan and fake Jack will imply that he doesn’t have to tell him anything. After all, Adam isn’t an Abbott. Adam will snap back that Jack knows he’s not an Abbott or a Bingham either. Thanks to Adam’s slip, fake Jack will be one step closer to learning that Gabriel is really Adam.

Gabe will share a quiet moment with Chelsea and promise to keep their romantic encounter a secret from Billy. Back at the penthouse, Chelsea will give Billy updates on her resignation and he’ll propose that they get married that night. It sounds like Adam will have to do something fast if he hopes to stop Chelsea from tying the knot. Stick with the Y&R to see if Chelsea and Billy will actually say “I do.

Enjoy the Y&R video promo below for May Sweeps!