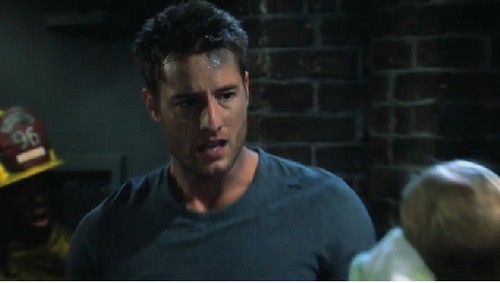 “The Young and the Restless” spoilers tease that the month of February will be full of explosive storylines and shocking twists and turns for the residents of Genoa City. In an all new “The Young and the Restless” spoiler video for February Sweeps it was revealed that there will be a catastrophic event in Genoa City, when a plane full of Genoa City residents crashes in Genoa City – there will be casualties and serious injuries, and some of our favorite Y&R characters’ lives will be forever changed.

“The Young and the Restless” spoiler video teases that the epic storyline kicks off on February 13 and, “In an instant everything changes forever and someone won’t make it out alive. It’s a Valentine’s Day to die for.” The insane February Sweeps promo video kicks off with Neil, Lily, Jill, Devon, Colin, and Cain riding in what appears to be a private plane. The plane hits some sort of turbulence or has an engine malfunction and begins going down – it crashes right in to the center of Genoa City, taking out several buildings and even more Genoa City residents who are inside of them.

“The Young and the Restless” Valentine’s Day spoiler video reveals that Cain and Neil survived the plane wreck just fine – but Lily is in bad shape, and they rush to begin digging her unconscious body out of the snow and plane rubble. Nick, Sage, Avery, Chelsea, Billy, Phyllis, and Kelly all seem to be trapped inside a demolished building after the plane wrecks. At least two men are receiving CPR, and Adam Newman can be seen at the end of the clip screaming for help.

“The Young and the Restless” spoilers and rumors have been teasing for quite a while that Avery’s ex-hubby, Joe Clark, would be killed off during February Sweeps, and it looks like this plane crash is going to be what takes him out. It should also be mentioned that in the promo video, Neil Winters can see – blind men don’t find their daughters buried in a snow bank. A popular Y&R theory blowing up social media right now is that Chelsea’s son Connor is injured in the wreck and he needs a donor, so Gabriel has no choice but to reveal that he is really Adam Newman, so that he can save his son’s life.

What do you think about the insane Y&R promo video? Do you think that Lily will live? What about Joe Clark? Who is the other man receiving CPR? Why is Adam Newman screaming, is Connor hurt? Let us know what you think in the comments below and don’t forget to check CDL tomorrow for more “The Young and the Restless” spoilers and news.