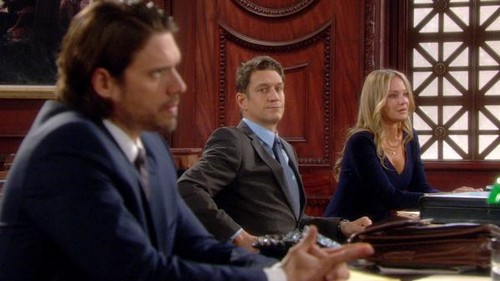 “The Young and the Restless” spoilers tease that the episode of the CBS soap airing on Thursday February 5 will be another emotional one, packed full of Genoa City drama. The Newman custody battle continues in court on the all new episode – and after Sharon’s outburst and running out of the court room, it does not look promising. Y&R spoilers tease that Sharon’s unlikely ally Dylan (Steve Burton) comforts Sharon and convinces her to return to the courtroom – where the judge delivers the verdict. Nick Newman (Josh Morrow) is getting full parental custody of his and Sharon’s daughter Faith.

“The Young and the Restless” spoilers tease that fans will want to keep a box of tissues close by on February 5 because you are in for some heart-wrenching scenes as Faith is pried away from her mother and taken to Nick’s house after she and Sharon say her goodbyes. According to Y&R spoilers Sharon is devastated by the news, and takes out the brunt of her emotions on Mariah (Camryn Grimes) – who she promptly kicks out of her house because she didn’t lie on the witness stand for her.

In other “The Young and the Restless” news, Jill and Cane head to Victor’s office to give him the rest of the money for Chancellor, and after signing on the dotted line they are the proud owners of Katherine’s company. However, Y&R spoilers reveal that it looks like Jill will be running the company by herself because Cane unexpectedly steps down once the company is purchased. Apparently, Colin’s blackmail skills even work on his own family members, and he threatens his son that if he doesn’t step down and give the company to Jill (Jess Walton), then he will tell Lily that he has been helping Devon (Bryton James) and Hilary hide their affair.

Meanwhile, spoilers also tease that on Thursday’s episode of “The Young and the Restless,” Neil Winters (Kristoff St. John)receives devastating news – he has been removed from the medical trial that he believed would give him his sight back because the doctors don’t think he is a good candidate.

So Y&R fans, do you think that the judge made the right decision giving Faith to Nick Newman? Do you feel sorry for Sharon, or do you think that she blew her chances with her wild outburst? What do you think of Dylan and Sharon growing closer? Let us know what you think in the comments below and don’t forget to check CDL tomorrow for more “The Young and the Restless” spoilers and news.