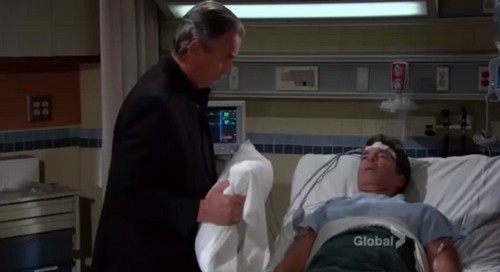 “The Young and the Restless” spoilers and recap for Thursday, July 2, tease that Gabriel (Justin Hartley) will sit by Jack’s (Peter Bergman) bedside and vow to make Victor (Eric Braeden) pay for what he’s done. Outside Jack’s room, Phyllis (Gina Tognoni) will hint that Gabriel might have been in cahoots with Victor. Ashley (Eileen Davidson) will mention that the results of the DNA test will be back soon. That could give them a little more insight. Sage (Kelly Sullivan) will hear them talking and say that Gabriel hates Victor. They’ll all argue until Gabe comes out to diffuse the situation.

When Phyllis and Ashley walk off, Sage will tell Gabe she’s worried about what’s going to happen to her when the truth comes out. The DNA test could prove Gabriel is really Adam Newman and Sage’s life could get turned upside down as well. Gabe will say that’s already been handled. In Jack’s room, Phyllis will voice her concerns over Gabriel and urge Jack to come back to her.

At the police station, Kevin (Greg Rikaart) will try to convince Mariah (Camryn Grimes) to get on board with the idea that what happened to Jack is connected to Austin (Matthew Atkinson) and Courtney’s (Kelli Goss) murders. Mariah will admit the idea makes sense in light of the security footage. Paul (Doug Davidson) will also get a call about the gun that was found in Victor’s office. It hasn’t been fired recently, which means it is wasn’t used to shoot Jack. Once Paul gets the updates, he’ll head to the hospital to tell Phyllis.

Nick (Joshua Morrow) will confront Victor and wonder if Jack pushed him too far. Victor will maintain his innocence. Nick will say he’s walking away from Victor just like he had to walk away from the company. Later, Victor will announce to Ashley and Chelsea (Melissa Claire Egan) that Gabriel is the new CEO. Ashley will suspect that Gabe saw Victor shoot Jack and that’s why Victor is making this move. When Ashley complains about Victor’s betrayal of her brother, Victor will insist that Jack isn’t who she thinks he is anymore.

Other “Young and the Restless” spoilers reveal that Noah (Robert Adamson) will get Marisa (Sofia Pernas) to open up about the danger she’s in. Marisa will say she wants to stay in Genoa City, but she needs a job. Noah will offer Marisa one at The Underground. Nick will arrive and say that Noah should steer clear of Victor. Noah will talk about all the recent suspicion of Sharon (Sharon Case) and how he won’t turn his back on his family. Nick will imply that he thinks Victor might have to pay for his crimes this time.

Chelsea will hint that Victoria (Amelia Heinle) and Billy (Burgess Jenkins) won’t like the news that Gabe is going to be CEO. Gabriel will reply that he can capitalize on Victor’s vulnerability. Chelsea will once again comment on how he reminds her of Adam. Chelsea will be concerned that Gabriel will fall prey to Adam’s mistakes. Gabe will indicate that he’s focusing on his life with Chelsea and Connor (Michael and Nolan Webb). A short time later, Marisa will show up to meet with Gabriel.

Back at the hospital, Phyllis will be furious when Victor stops by Jack’s room. Suddenly, Jack will open his eyes and Phyllis will ask who shot him. Jack will point to Victor and Phyllis will rush out for help. When Phyllis returns, she’ll see Victor preparing to smother Jack with a pillow. It sounds like Victor’s ruthlessness may land him in hot water. Y&R rumors say that more trouble lies ahead. Stick with the CBS soap to see if Victor can find a way out of this mess.

Enjoy The Young and the Restless video promo for Thursday, July 2 – Watch Below!