‘The Young and the Restless’ Spoilers: Stitch Turns to Ashley in Grief – Devon Comes Clean to Lily – Neil Envisions Revenge 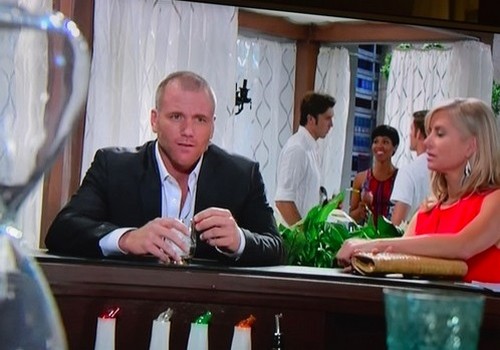 “The Young and the Restless” spoilers for Monday, August 10, tease a great Y&R episode in which Neil (Kristoff St. John) will assure Nikki (Melody Thomas Scott) that she doesn’t have to worry about him. Neil will add that he was on his best behavior when he was trapped in the elevator with Hilary (Mishael Morgan). Nikki will wonder how Neil is able to cope without drinking. Neil will reply that he just makes a conscious decision not to let anyone get to him. Nikki will say she’d like to return to normal life at the ranch, but she fears Victor (Eric Braeden) would trigger her to drink. Neil will encourage Nikki to take her time and do what’s right for her. Victor will just have to deal with it.

On the rooftop of the athletic club, Devon (Bryton James) will ask Cane (Daniel Goddard) if he knows where Colin (Tristan Rogers) is. Cane will joke that Colin is probably up to no good. A short time later, Lily (Christel Khalil) and Hilary will want to chat about the wedding details. Devon will seem upset and blurt out that he can’t handle this right now. Hilary will say that Devon hasn’t been the same since the bachelor party. When Hilary asks if Devon is getting cold feet, he’ll reply that he’s just stressed and hasn’t been getting enough sleep.

Lily will meet up with Cane and thank him for changing his mind about the custody issue. Cane will indicate that they can still be some sort of a family even if they aren’t together. They need to be there for their children. Later, Lily will question Devon about why he’s been freaking out. Devon will admit that he doesn’t remember much about the bachelor party, but he thinks he had sex with a hooker. Devon will state that he wasn’t looking for one final fling before he got married. Lily will wonder if it’s possible that Devon was drugged. Devon won’t know for sure, but he’ll think he needs to come clean to Hilary about what happened.

Other “Young and the Restless” spoilers reveal that Hilary will want Cane to be honest about what went down at the bachelor party. Cane will assure Hilary she doesn’t need to worry. Neil will appear and put his two cents in. Neil will suggest that this marriage is just a big change for Devon and he’ll have to adjust. Neil will have a fantasy about Hilary watching the video that shows Devon going into the bedroom with the hooker. In the daydream, Hilary will throw her engagement ring at Devon and say shout that the wedding is off. Cane will see Neil in a trance and ask if he’s OK. Neil will ominously reply that he will be.

Victoria (Amelia Heinle) and Abby (Melissa Ordway) will bicker over their upcoming presentation. Abby will want to put a little fun into it, but Victoria will stand by the tried-and-true method she’s always used. Victoria will eventually agree to go along with Abby’s suggestion. After the presentation goes well, Victoria will be thrilled. They’ll agree that they were a good team. Victoria will declare that she’s going to tell Victor what a great job Abby did at the conference.

Victor will accuse Ashley (Eileen Davidson) of conspiring against him, but she’ll think that’s absurd. Victor will add that he knows what Ashley is capable of and he’ll remind her of the Abbotts’ recent embezzlement plan. Ashley will stay firm on the fact that she’s never heard of the Paragon Project and she isn’t scheming. Victor will vow to take down the person who is responsible for this shady plot, especially if it was someone from his circle.

At the hospital, Stitch (Sean Carrigan) will try to revive his patient, but his efforts will fail. As Stitch deals with his grief, he’ll give Abby a call. Stitch will start to say something about his patient on a voicemail message, but he’ll decide to keep it to himself. After his shift is over, Ashley will see Stitch at the rooftop bar. Stitch will give her updates on the situation and Ashley will try to comfort him. Ashley will insist that Stitch did his best and Abby would agree with her. Stitch will admit he can’t open up to Abby like he can to Ashley.

Meanwhile, Abby will tell Victoria about the sorrowful voicemail she received. Abby will hint that Stitch doesn’t feel she’s grown up enough to handle his problems and bad news. Victoria will say that Abby shouldn’t be afraid of the meaningful conversations that come with a deeper relationship. Victoria will encourage Abby to be there for Stitch when he needs her. Abby is realizing that she needs to step it up, but is she too late? Y&R rumors hint that Stitch may continue to fall for Ashley. Stick with the CBS soap to see which Abbott will win Stitch’s heart.