‘The Young and the Restless’ Spoilers: Will Neil’s Revenge Plot Against Devon and Hillary Turn Deadly After Old Lover Returns? 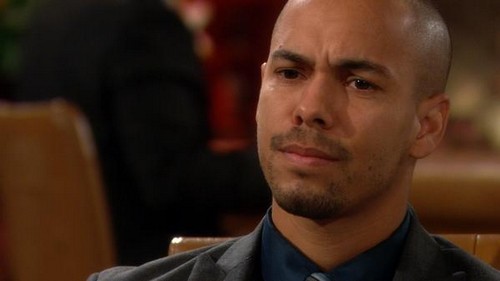 The Young and the Restless spoilers are giving away a glimpse into the dark side that Neil Winters [Kristoff St. John] dives into head first and at full throttle. Neil was thrilled that his vision finally returned after being blind for the last several months. Only to have his first sight to be his son Devon [Bryton James] and his wife Hillary [Mishael Morgan] in bed together inside Devon’s private suite. The total shock and betrayal Neil felt, did not allow him to tell his family that his sight had returned.

Neil did not trust anyone, not even his beloved daughter Lily [Christel Khalil] or her husband Cane [Daniel Goddard]. One of the first places, Neil a sober alcoholic for many years, rushed to was the nearest bar for a drink! Y&R rumors are hearing that Neil will go on pretending he is still blind to watch his family’s every move, especially Devon’s and Hillary’s, to determine how long and far this torrid affair has been going on behind his back.

Hillary and Devon have promised to finally come clean and tell Neil the truth before Valentine’s Day. But with the Valentine’s Day storm approaching Genoa City, their plans get aborted. This, according to the latest Young and the Restless spoilers, will give Neil more time to plan his game of revenge on the pair of lovers. We are also learning more rumors that someone “pays” Neil a visit and tries to help him navigate his own nightmare of a life. Hoping to give him the courage and strength he needs to bounce back from this ultimate betrayal.

Rumors are teasing that either Neil’s brother Malcolm or Neil’s “late” wife Drucilla may make an appearance on YR to give him support and loving advice he surely needs to hear right about now. Do you think Neil should seek revenge on Devon and Hillary or just release them from their lies and go on with his own life now that his vision has been restored? If you had to pick either advice from Malcolm or Dru, who do you think would be better suited to help Neil with his devastation? We can all agree on one thing.  We are more than thrilled Neil has finally learned the truth and more importantly got his sight back! Now it’s time for the healing process to being. Come back to CDL daily for more The Young and the Restless spoilers.