The Young and the Restless (Y&R) Spoilers: Dr. Anderson Takes Revenge on Nick To The Next Level – Dastardly Plans Exposed? 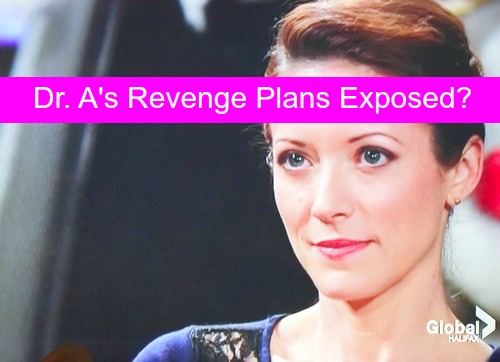 “The Young and the Restless” (Y&R) spoilers tease that Dr. Anderson [Elizabeth Bogush] is gearing up to take her revenge to the next level with Nick Newman [Joshua Morrow]. Dr. Anderson’s exact plans are somewhat of a mystery, but one thing is certain- she has an evil plan in the works and out to destroy every aspect of Nick’s life!

Dr. A struck first by killing Nick’s dreams of having a perfect life with Sage [Kelly Sullivan]; the plan started when the shady doctor made them believe their child died. Sage was unable to deal with the anger and guilt she felt over Christian’s ‘death,’ and it eventually drove a wedge between them. If things don’t change soon, Sage and Nick are headed for a messy divorce.

Sage felt as if she was better off grieving alone, and shut her devoted husband out of her life. Sage turned to Nick’s half-brother, Adam Newman [Justin Hartley] for support. Nick felt confused about her change of heart regarding Adam. He was under the impression that she despised the man.

Nick was left feeling betrayed, neglected, and helpless; what’s worse is he doesn’t know how to repair their marriage, at this point.

Dr. Anderson continued her crusade to ruin Nick’s marriage when she offered her services as a therapist to help him grieve for his newborn son. Dr. A promised to give him a unique insight into how to move on with his life without Christian [and Sage]. Nick felt safe and secure with the beautiful doctor; Nick made an appointment with Dr. A immediately for individual therapy.

When Sharon was presented with a baby boy, Sharon [Sharon Case] didn’t question how she could have delivered a child without remembering. Sharon and Dylan [Steve Burton] embraced the child as their son, and never questioned how she could deliver a child and not remember one detail about it. After a few days, Sharon was discharged from Fairview with her baby, whom she named Sully.

Sage ran into Dr. A in Chancellor Park a few days ago, and she advised Sage it would be best for her to grieve alone. It seems like that Sage wants to let Nick in; however, Dr. A keeps insisting that is the wrong thing to do. After all, Dr. Anderson is a therapist – she knows best, right?

Dr. Anderson arrives at Crimson Light’s to see Sharon, to touch base with her and how she was feeling since her release from Fairview. Dr. A asked how she was feeling since she was discharged. Sharon revealed to her that she lives on the same property as Nick; the news sent Dr. A in a tailspin. Dr. Anderson told Sharon she was doing well, and to keep in touch about her mental status, so they can be proactive in her recovery.

Dr. Anderson went home to look up some information on Nick Newman. Clearly, her target is, in fact, Nick. She saw something on the Internet that upset her and slammed her laptop shut. Could Sharon become a complication in her revenge plot?

Is Dr. Anderson really Sandra Allen, and what is her end game with Nick? Why did she pick now, after 30 years to return and seek revenge against Nick? More than anything, Dr. Anderson tactics resemble Sheila Carter’s [Kimberlin Brown] antics when she came back to torment Lauren, multiple times. Don’t forget to come back later for juicer “The Young and the Restless” spoilers, gossip, and news!