The Young and the Restless (YR) Spoilers: Who Is Dr. Anderson – Is Ian Ward Her Father? 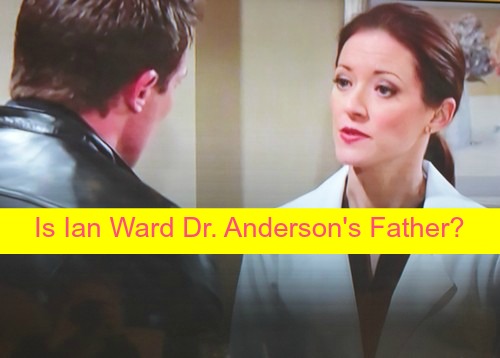 “The Young and the Restless” (Y&R) spoilers tease that Ian Ward [Ray Wise] is not done yet wreaking havoc on Genoa City. Ian Ward mentioned a daughter when he was courting Phyllis [Gina Tognoni] a few months ago. Ever since, it has been speculated that Ian’s daughter could be Sharon Newman [Sharon Case].

It looks like Sharon is NOT Ian’s daughter, but new evidence suggests that Dr. Anderson [Elizabeth] could be his daughter. And, if the rumors are right – Ian sent her to settle the score with the Newman’s once and for all.

Ian Ward has a few more months left in his “The Young and the Restless” contract. After Ian’s time is up, he will disappear for a few months, only to resurface with a new plan to bring down the Newman clan.

Dr. A is a mysterious character that has not revealed anything about herself other than she seems to have eyes for Nick Newman [Joshua Morrow]. It isn’t clear if Dr. A’s motive to get close to Nick is because a revenge plot, or because she wants to have a romantic relationship with him.

Ian has become the super villain of the show – so it makes sense that Dr. A COULD be his daughter. She oozes a creepy vibe, and her motives are not completely known, yet. Eventually, her intentions will become clear and fans will be able to piece together why she came to Genoa City and why she is involved in the kidnapping and faked death of Christian Newman.

The popular Internet theory claims that Dr. A is working with her father, Ian Ward. He asked Dr. A to arrange to take Nick’s baby from him to hurt Victor Newman [Eric Braiden]. In turn, he wants her to give the newborn to Sharon because he regrets stealing her child, Mariah [Camryn Grimes] from her years ago.

The kidnapping scheme is an outlet for Ian to wreak more havoc in the Newman’s lives. It is very possible that Ian knows that Christian is Adam’s [Justin Hartley] son, and he plans to use the infant to toy with Adam, Nick, and Victor. Is it possible that Dr. A’s biological [or adoptive] father is none other than Ian Ward? Don’t forget to come back soon for more juicy “The Young and the Restless” spoilers, rumors, and updates!