Tom Cruise Not Suri Cruise’s Dad, Shocking New Report – Did Katie Holmes Cheat On Tom, Or was There A Sperm Donor? 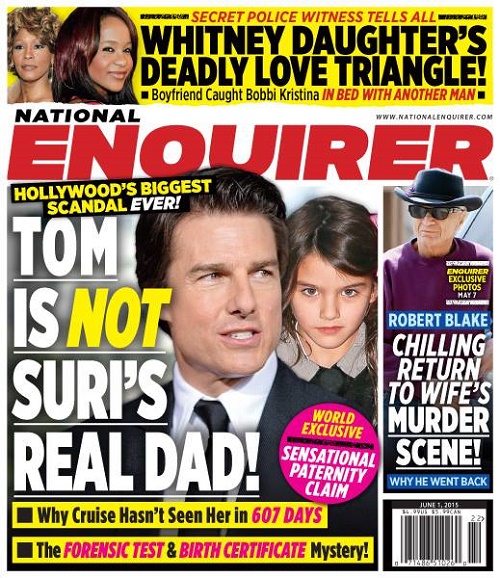 The June 1 cover of National Enquirer features a photo of Tom Cruisee and Suri, and the headline screams, “Hollywood’s Biggest Scandal Ever: Tom Is Not Suri’s Real Dad.” National Enquirer’s cover goes on to say that there is a “sensational paternity claim,” and there is a “forensic test and birth certificate mystery.” There is only one problem – Suri Cruise is a spitting image of Tom Cruise, so we are having a tough time buying the idea that they are not related.If by some bizarre turn of events Tom really isn’t Suri’s dad, then we have a sneaking suspicion that Katie most likely underwent fertility treatments or used a sperm donor. We all know how controlling Tom Cruise was when he and Katie Holmes were married, when would she have found the time to go cheat on him and get pregnant, without him noticing?

And, in other celebrity gossip news, this week’s cover of National Enquirer also teases a piece on Bobbi Kristina Brown. Apparently, before her tragic drowning accident Bobbi was caught in a “deadly love triangle” and Nick Gordon caught her in bed with another man. It’s kind of a low blow to drag someone who has irreversible brain damage through the mud and accuse them of having an affair before they were paralyzed – unless Nick Gordon tried to kill her Bobbi when he caught her cheating and that is how she wound up drowning. Sadly, we will probably never know what really transpired that fateful day. Also, if you have been following Robert Blake’s wife’s murder story – National Enquirer claims to have some shocking new information about the murder scene.

So, do you think there is a chance that Tom Cruise is not Suri’s dad? Is that why he hasn’t seen her in nearly two years? Was Bobbi Kristina’s drowning a result of a domestic dispute after she was caught cheating on Gordon? Let us know what you think in the comments below!