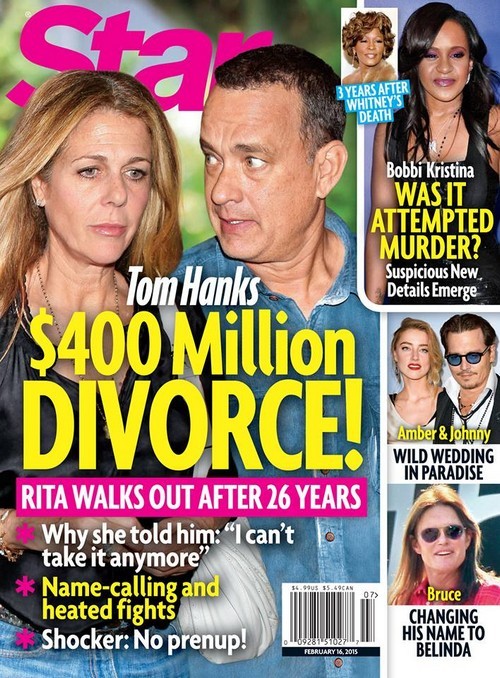 Tom Hanks and Rita Wilson have been married for 26 years, but the latest cover issue of Star Magazine claims a split and that they’re about to fight a $400 million divorce battle. Damn, I didn’t even know Tom Cruise and Rita Wilson were worth that much.

The big shocker in this supposed ‘divorce’ seems to be that there is no prenup, which would obviously complicate matters significantly. Rita Wilson and Tom Hanks have built an entire life together, they have children together, they have homes together, and even some of their business endeavors were shared. In such a divorce – without a prenup – splitting up the money, the finances, and the properties will be hellish.

Star claims that the divorce has been a long time coming, and it’s gotten to the point that both Tom and Rita are getting into heated fights every other day and calling each other names. Is it just me, or can anybody just NOT imagine Tom Cruise calling anyone ‘names’, much less his own wife?

Star also has a story about Bobbi Kristina Brown’s suicide attempt, and how suspicious new details have emerged making it look like an attempted murder. Obviously, the blame for such a murder is falling smack dab on Nick Gordon, Bobbi’s brother/husband.

Plus, Bruce Jenner is reportedly changing his name to ‘Belinda’ after his sex change, which wouldn’t be surprising. Bruce has finally gone public with his sex change news after several years of increasing rumors, and it’s about time that he stopped caring what his family or the public thinks of him.

Finally, Johnny Depp and Amber Heard reportedly had a ‘wild wedding in paradise‘. Um, good for them, I guess? Call me if these two last another year. Johnny’s mid-life crisis might continue indefinitely, but there is no way in hell Amber Heard is sticking around for much longer, especially if her career stays stagnant.