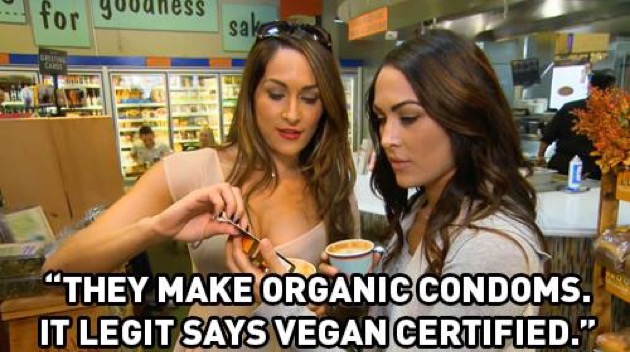 Tonight on E! the WWE’s Total Divas starring the Bella Twins and the rest of the Divas continues with an all new Sunday February 8, season 3 episode 15 called, “Girl vs. Girl Bye,” and we have your weekly recap below. On tonight’s episode, the future of the Bella Twins is in question after Brie’s admission that she doesn’t use protection.

On the last episode Ariane secretly teamed up with Jonathan to confront Eva Marie about a major issue; Brie lived in fear after a home invasion; and Paige faced the consequences of sending mixed signals. Did you watch the last episode? If you missed it, we have a full and detailed recap right here for you.

On tonight’s episode as per the E! synopsis, “the future of the Bella Twins is in question after Brie’s admission that she doesn’t use protection; Nattie is forced to work with TJ even though they are separated; and Ariane makes a disastrous attempt to find out why exactly Alicia hates her.”

Things have honestly never been better for the Bella Twins on tonight’s all new episode of “Total Divas”. Their relationship, both in the ring and out of it, has been great and they seem like they’ve moved from their fight a couple of weeks ago. However, one of the reasons Nikki and Brie fell out is that one sister had overstepped and sadly that looks like it’s happening all over again.

Brie and Nikki were out shopping when Nikki found her sister doesn’t use birth control. Apparently, Brie doesn’t use condoms because she’s married but she also doesn’t use the pill because she doesn’t want to put chemicals in her body. So right now she and her husband are using the old fashion “pull-out” method.

And Nikki told her sister that wasn’t smart. She and Brie have recently expanded their brand into merchandising and they currently have a lot of money being invested in them. So, if Brie has another in the works – Nikki thinks she should just be upfront with it.

Later, John told Nikki he understood her frustrations but at the end of the day he feels like Brie has a right to have a baby if she wants. And, well, Nikki still didn’t quite agree with him.

So as she’s trying to find a way to talk her sister Brie into focusing on their careers, others are using just as unscrupulous methods. Ariane has been reaching out a lot lately because she wants to mend fences with Alicia. It seems the two of them got off on the wrong foot from the very start and Ariane thinks eventually if they work things out then who knows maybe they could have a professional relationship.

But Alicia doesn’t want to make nice with Ariane. She kind of loathes her and isn’t shy about hiding. So Alicia’s friends decided to ask Ariane to come out for a girls’ weekend with them. They figure if Alicia couldn’t ignore Ariane – she would be forced to tolerate her.

Alicia, though, refused to meet any expectations. She kept going at Ariane even as the other woman tried to be the bigger person. So Ariane snapped and then the trip just kind of unraveled from there.

Poor Rosa was stuck in the middle and she didn’t know how to keep the two women from fighting. So, ultimately, she proved to be useless. At least when it comes to peacemaking anyways.

Though Ariane and Alicia did finally sit down and voice their concerns with each other. And funnily enough it looks like Alicia has been acting the way she does because she thought Ariane was going to be her replacement. Yet Ariane told her there was room for the both of them in the company. So, once, Alicia put her aside her insecurities – she and Ariane agreed to be on non-hateful speaking terms.

In other words, they’re not friends but now maybe they won’t be diehard enemies.

As for Nikki and Brie, Nikki had actually had the audacity to invite Brie and her husband to dinner just so she could convince them to use birth control. And what do you think was Brie’s reaction to that?!?!

Brie told her sister off. What she does with her husband is none of Nikki’s business. Then Brie also said Nikki was too cold hearted if she didn’t want to merely be happy for her sister. And to an extent she’s right.

The reason Nikki is worried is not out of concern for her sister. Right now, all she’s thinking about is herself and how much her career will be affected by her sister’s potential maternity leave. And so that’s why she went behind her sister’s back to set up a meeting with their merchandiser.

Brie isn’t pregnant and she hasn’t exactly left the ring but Nikki is already treating her future pregnancy as a forgone conclusion. And while that frustrating the hell out of Brie – Nikki seems to think she only now just thinking of herself. Hence, making a business decision.

And its whiny behavior like that is what’s pushing people away.

Nattie, you see, has in reality fallen into a rut and generally that would have gotten her friends to rally around but as she continues to mop – she’s turning her best friends off. So, even though, it might be hard not to worry about what the future – can’t they simply choose to live in the moment?