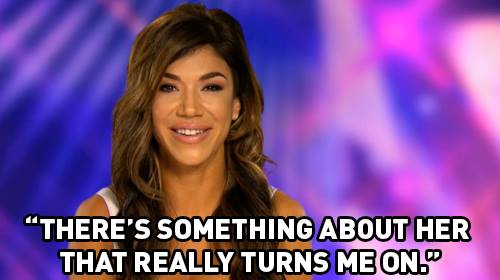 Tonight on E! the WWE’s Total Divas starring the Bella Twins and the rest of the Divas continues with an all new Sunday January 25, season 3 episode 14 called, “Insecurity Breach,” and we have your weekly recap below. On tonight’s episode, Ariane secretly teams up with Jonathan to confront Eva Marie about a major issue

On the last episode Eva was faced with a life-threatening medical issue; Paige got a bit too close to Nattie in the ring; and what started out as a friendly competition between Nikki and John escalated into a serious fight. Did you watch the last episode? If you missed it, we have a full and detailed recap right here for you.

On tonight’s episode as per the E! synopsis, “Ariane secretly teams up with Jonathan to confront Eva Marie about a major issue; Brie lives in fear after a home invasion; and Paige faces the consequences of sending mixed signals.”

During a lunch with the girls, Brie was forced to go into a former incident that had occurred at her house. Apparently, a few months ago, people had broken into her home and thankfully her husband was able to catch them in the act. And yet since then Brie and her husband Bryan haven’t exactly done much to protect their home. They still don’t have an alarm system and Nikki seems to think that has a lot to do with just the way her sister is.

According to Nikki, Brie is a tad a naive. And she’d rather bury her head in the sand than take proactive measurements against further intrusion.

Yet that appears to be changing. After Bryan took the first step in protecting their home by going out and buying an alarm system his wife then voiced concerns that maybe they weren’t doing enough. So she started talking to him about possibly bringing a gun into the house.

It seems the cop that was first to the scene after the break-in had been the one to give her this idea. And wasn’t until she still felt unsafe in her home that she started to take his suggestion on buying a gun seriously. However Bryan doesn’t like the idea and he’s told his wife that having gun is not going to stop people from approaching the house or trying to break-in.

Elsewhere, though, Brie isn’t the only diva going off the bend. Eva was recently asked to be on the cover of a magazine and somehow she seems to think she’s currently too fat for it. So she’s been working out nonstop and that’s scaring Ariane.

Ariane can’t understand why her friend is calling herself disgusting and skipping meals when she’s already in great shape. And it’s not like Ariane is the only one thinking this. Everyone that’s seen Eva doesn’t think there’s a thing wrong with her.

But, since she’s had her surgery, Eva has become hypercritical of herself. And is finding fault in basically everything.

The final straw for Ariane came when she and Eva had gone out shopping. They were having fun and then Eva suddenly didn’t feel well. So Ariane checked up on her and after she noticed how pale Eva was she then asked “when was the last time she east”? And Eva replied “yesterday”.

They had gone shopping in the afternoon so why didn’t Eva eat anything that morning?

So Ariane then arranged a special exercise for Eva with Eva’s husband Jonathan’s help. She had Eva describe herself to an artist that was going to draw a picture of her description and then she had someone else actually draw a picture of what they saw of her. And the end result was that Eva realized how distorted her view was.

Once she saw for herself how much she was wrong about what she saw in the mirror everyday – she broke down in tears. And though she’s going to need a lot of help in the future in order to see herself properly – at least now she can start eating again instead of missing meals based on her disillusion.

As for her photo-shoot, Eva stopped worrying seconds in.

And then on the other end of the spectrum there’s Rose who gotten too confident. Rosa believes she’s been getting signals from Paige. Though she was later warned it could all be her in head these supposed signals she’s talking about.

Yet, in spite of that warning, Rosa made a move on Paige and Paige politely told her she didn’t see her as anything more than a friend. It seems the “signals” were actually Paige just trying to reassure her friend that she was in fact beautiful. Albeit in a slightly flirty manner. And reassuring someone is something any good friend would do though Rosa took what she said to mean something else.

And now their friendship is falling apart. Because Rosa had told Paige that it was ok Paige didn’t have feelings then she turned around and ignored Paige’s phone calls.

Paige couldn’t understand why she was being shunned and asking their third amigo Foxy for help it didn’t really end up solving things. Foxy tried to get the two of them to meet and Rosa had a big blow out when she did that. She said she was being bombarded and that she wanted her space. And Paige, for her part, told Rosa she could have all the space she wants.

Although, Nattie told her she should still try to mend fences but Rosa wasn’t going to make it easy. So when Paige did come to talk – she did the one thing Rosa needed the most and that was to apologize. Paige never says she’s sorry and yet she had flirted with Rosa so when she did apologize – it let Rosa truly know how much their friendship meant to her.

And as for Brie, she dropped the whole gun issue and stopped going on about a barbed wire fence after her husband promised her he was going to start a neighborhood watch. So, mercifully that scenario didn’t end up getting ugly.