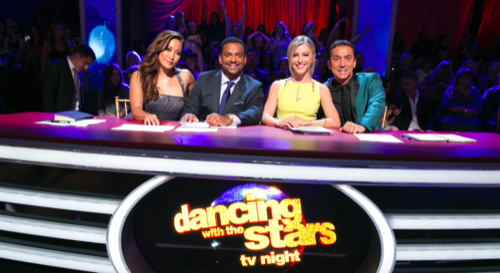 Tonight on ABC it’s the Dancing With The Stars first elimination of Season 21 and we will say goodbye to another star. On tonight’s performance episode an elimination occurs after the fourth week of performances.  Last week we lost Kim Zocliak who had to withdraw from the competition due to health issues.

After last week’s performances, at the top of the leaderboard was Alexa PenaVega and her partner Mark Ballas dancing the Jazz scoring 26/30 and they tied with Nick Carter and his partner Sharna Burgess dancing the Viennese Waltz. At the bottom of the leaderboard Gary Busey and his partner Anna Trebunskaya danced the Tango scoring 15/30.  Did you miss the episode?  If you did we have a full and detailed recap, right here.

On tonight’s episode, “each celebrity will set out to leave a lasting impression with their dances as they commemorate their most memorable year on “Dancing with the Stars.” Each couple will dance to a song of the celebrity’s choosing that encompasses a memorable time, or truly incredible experience in their life. These heartfelt performances promise to showcase some of the most exciting choreography and emotionally powerful routines of the season yet. Viewers can expect to see Nick Carter dancing to a Backstreet Boys hit song, Gary Busey paying homage to Buddy Holly, and Bindi Irwin commemorating her father, to name a few. At the end of evening, one couple will be eliminated from the ballroom competition.”

Sure Enough Gary Busey and Anna Trebunskaya have been eliminated! Check out our full detailed recap for all the details on tonight’s show!